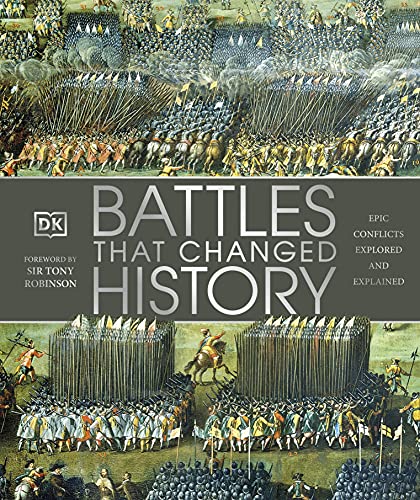 Battles that Changed History by DK

Discover the stories behind more than 90 of the world's most significant battles in this lavishly illustrated history book.

The most important battles ever to take place are brought to life in the most spectacular way. From the brutal battle of Gettysburg to the epic air-sea battle of Midway, find out how fateful decisions led to glorious victories and crushing defeats.

Journey through the battlefields of history and follow the key developments of World War I, World War II, the Cold War and more in unprecedented visual detail. Using maps, paintings, artefacts, and photographs, Battles That Changed History is a guided tour of every major conflict in history.

Explore the stories behind more than 90 important battles and discover how pivotal moments and tactical decisions have altered the course of history. From medieval clashes and great naval conflicts to the era of high-tech air battles, key campaigns are illustrated and analysed in detail. Learn incredible facts about the weapons, armour, soldiers, and military strategies behind some of the greatest battles ever.

This reference book includes profiles of famous military leaders like Alexander the Great, Napoleon, and Rommel. See how kingdoms and empires have been won and lost on the battlefield. Go into the thick of combat at the Great Siege of Malta, the Battle of Stalingrad, and the icy waters of Dunkirk. It is the ultimate guide to the history of military conflict.

This stunning coffee table book from DK Books is a visual treat for history buffs, old and young. It includes a foreword from award-winning writer, TV presenter and historian, Sir Tony Robinson whose TV credits include Time Team, Blackadder,and The Worst Jobs in History.

Any map fan will have an absolute field day with Battles That Changed History, as its many sumptuously crafted maps intricately detail the battles in question with beautiful clarity. This is without a doubt one of DK's finest history offerings in several years. * All About History *
Some depictions of human conflict acquire such a charm over centuries, we half forget we are seeing a bloodbath. Others have an enduring power to appal. Recent documentary photographs strike a chill. This lavishly illustrated chronicle of warfare explores epic battles that turned the historic tide - from Manzikert to Marston Moor to the Middle East - while reminding us that nothing really changes. * Saga Magazine *
Sir Tony Robinson is an award-winning writer, presenter, and actor, and the UK's foremost face of popular history. His television credits include Time Team (Channel 4), Blackadder (BBC1), The Worst Jobs In History (Channel 4), Walking Through History(Channel 4), Me and My Mum (ABC), Tony Robinson's Coast to Coast (Channel 5), Britain's Ancient Tracks (Channel 4), and more. As a children's television writer, he has won two RTS awards, a BAFTA, and the International Prix Jeunesse, and his work includes Central TV's Fat Tulip's Garden, Odysseus - the Greatest Hero of Them All, and Blood and Honey. He has also made a range of television documentaries, written 30 children's books, winning the Blue Peter Factual Book Award twice, and several books for adults, including his autobiography No Cunning Plan. In 2012 he was made a Fellow of Cardiff University, and he has been awarded honorary doctorates and masters' degrees by several leading universities. He is an ambassador for the Alzheimer's Society, and received a knighthood in 2013.
GOR009568194
9780241301937
0241301939
Battles that Changed History: Epic Conflicts Explored and Explained by DK
DK
Used - Very Good
Hardback
Dorling Kindersley Ltd
20180906
256
N/A
Book picture is for illustrative purposes only, actual binding, cover or edition may vary.
This is a used book - there is no escaping the fact it has been read by someone else and it will show signs of wear and previous use. Overall we expect it to be in very good condition, but if you are not entirely satisfied please get in touch with us
Trustpilot