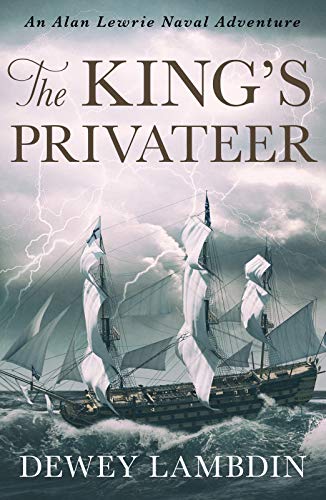 The King's Privateer by Dewey Lambdin

The King's Privateer by Dewey Lambdin

A rogue officer turns privateer in this thrilling historical adventure.

1783: Officer Alan Lewrie becomes His Majesty's secret agent. Fresh from war in the Americas, Lewrie finds London a pure pleasure. Then, at Plymouth, he boards the trading ship Telesto to find out why merchantmen are disappearing in the East Indies.

Between the pungent shores of Calcutta and teaming Canton, Lewrie discovers a young French captain, backed by an armada of pirates, on a plundering rampage. While treaties tie the navy's hands, a King's privateer is free to plunge into the fire and blood of a dirty war in the South China Sea.

The King's Privateer is perfect for fans of Bernard Cornwell and Patrick O'Brian.

Dewey Lambdin is an American nautical historical novelist. He is best known for his Alan Lewrie Naval Adventures series, spanning the American Revolution and the Napoleonic Wars. A member of the U.S. Naval Institute and a Friend of the National Maritime Museum in Greenwich, England, he spends his free time working and sailing. Besides the Alan Lewrie series, he is also the author of What Lies Buried: a novel of Old Cape Fear.
GOR010864459
9781788635721
1788635728
The King's Privateer by Dewey Lambdin
Dewey Lambdin
The Alan Lewrie Naval Adventures
Used - Very Good
Paperback
Canelo
2019-10-10
400
N/A
Book picture is for illustrative purposes only, actual binding, cover or edition may vary.
This is a used book - there is no escaping the fact it has been read by someone else and it will show signs of wear and previous use. Overall we expect it to be in very good condition, but if you are not entirely satisfied please get in touch with us
Trustpilot