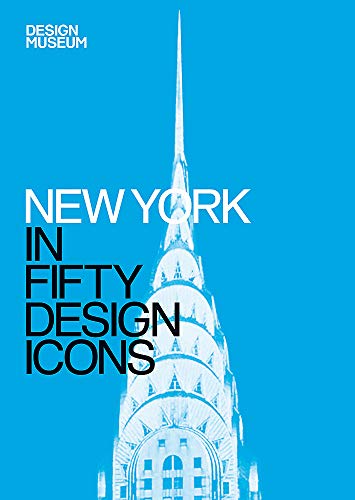 One of two titles in a new series from London's prestigious Design Museum, looking at the unique design stories of the most iconic cities in the world.

In this new series, the Design Museum looks at the fifty design icons of major cities around the world - icons that, when viewed together, inherently sum up the spirit of their city. Covering anything from buildings and monuments to a graffiti mural or an item of clothing, we are able to build up an intricate portrait of a city, layer by layer.

From the infamous Chysler Building and the Brooklyn Bridge to the New York Yankees logo or CBGB's, the beating heart of the 1970s punk movement, New York is a tapestry of design masterpieces. Join Julie Iovine, architectural writer at the Wall Street Journal and formerly of the New York Times, as she unravels the visual history of one of our most famous and fascinating cities.

The Design Museum's mission is to celebrate, entertain and inform. It is the world's leading museum devoted to contemporary design in every form from furniture to fashion, and architecture to graphics. It is working to place design at the centre of contemporary culture and demonstrates both the richness of the creativity to be found in all forms of design, and its importance. Julie Iovine is an architecture and design journalist in New York. She is the architecture columnist for the Wall Street Journal and previously spent more than a decade as a design reporter at the New York Times.
GOR007856024
9781840916911
1840916915
New York in Fifty Design Icons: Design Museum Fifty by Design Museum Enterprise Limited
Design Museum Enterprise Limited
Design Museum Fifty
Used - Very Good
Hardback
Octopus Publishing Group
2015-09-03
112
N/A
Book picture is for illustrative purposes only, actual binding, cover or edition may vary.
This is a used book - there is no escaping the fact it has been read by someone else and it will show signs of wear and previous use. Overall we expect it to be in very good condition, but if you are not entirely satisfied please get in touch with us
Trustpilot