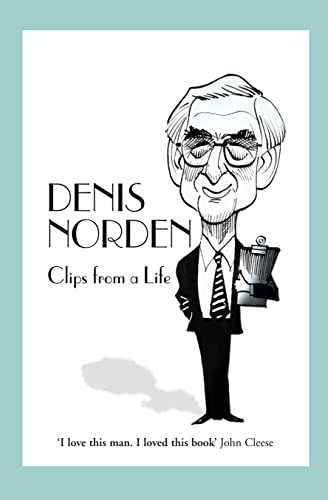 Clips From A Life by Denis Norden

Classic stills from the life of one of Britain's most cherished entertainers.

Clips From A Life by Denis Norden

Classic stills from the life of one of Britain's most cherished entertainers.

This is the extraordinary life story of comic legend Denis Norden, told in momentary snapshots by the master British comedian himself. Containing reminiscences of a career stretching back to the golden age of the radio, through the heyday of cinema and the early pioneering days of television comedy, `Clips From a Life' showcases Denis Norden's creative genius at its very best.

Told with Denis' hallmark flashes of brilliant humour and sharp observation, the extraordinary life of this enduring humorist is unravelled through his private recollections of the ways things used to be, back then. Denis' school-day musings, dry witticisms, and old-time sayings unearthed from days gone by, combined with remembrances of collaborations with famous figures of the day, from Eric Sykes to Bill Fraser, will sweep you back instantaneously to the magical gags, lively characters and laughter of the past.

Flitting between Denis' East End childhood and early career in Variety as a cinema manager for the Hyams Brothers, to his post-war work as a scriptwriter on the groundbreaking radio shows `Take It From Here' and `In All Directions', to the phenomenally successful television comedy `Whack-O!' (all written with long-term collaborator Frank Muir), to his years as a solo writer, performer, and presenter on programmes such as the much-loved `It'll Be Alright on the Night', it is easy to see how Denis' comic appeal has endured for decades, to make him one of the greatest British writers and performers to date.

Brimming with Denis's unique wit and personal warmth, this is a rich and compelling mix of anecdote and autobiography from a very special entertainer.

`This collection of anecdotes and autobiography reveals that he is much more than just a linkman. It is as much social history as life-story.' Sunday Telegraph (Book of the Year)

`A sparklingly anecdotal memoir of Norden's long and golden career in comedy. A timely reminder, in these Brand and Ross-tinged times, of a true comic genius.' Daily Mail (Book of the Year)

`It's predictably marvelous. High jinks backstage are the keynote - on television, radio and in the London cinemas where he presided during the Second World War.' Scotsman

Denis Norden is one of Britain's best-loved and most enduring entertainers. In a career that stretches back to the golden age of radio, and the pioneering years of television comedy, he has worked alongside such greats as Eric Sykes, Spike Milligan and Peter Ustinov and has co-written and presented numerous successful radio and television shows. The much-loved It'll Be Alright on the Night ran for over 29 years, earning Denis a place in The Guinness Book of Records. He was awarded the Writers Guild of Great Britain Comedy Award for Lifetime Achievement in 1999.

GOR000989651
9780007277964
0007277962
Clips From A Life by Denis Norden
Denis Norden
Used - Very Good
Paperback
HarperCollins Publishers
2009-04-30
320
N/A
Book picture is for illustrative purposes only, actual binding, cover or edition may vary.
This is a used book - there is no escaping the fact it has been read by someone else and it will show signs of wear and previous use. Overall we expect it to be in very good condition, but if you are not entirely satisfied please get in touch with us
Trustpilot