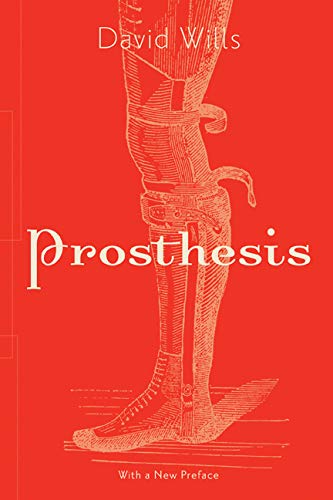 Prosthesis is a landmark work in posthuman thought that analyzes and explores the human body as a technology, seamlessly integrated (both physically and psychologically) with prosthetics. Here David Wills lays the groundwork for ideas he develops in two of his other books, Dorsality, exploring how technology functions behind or before the human, and Inanimation, giving perspective on what it means to be alive.

In Prosthesis, Wills promotes the idea that the human body is open to supplementation by artificial addenda that operate both internally or externally and engage it in an unceasing arbitration with the environment. Questioning the opposition between animate and inanimate along with the logic of the automatic prioritization of living flesh, Prosthesis undertakes these assumptions by studying thematics of artificiality through the writings of Freud, Derrida, William Gibson, Peter Greenaway, and others. In the twenty-five years since its first publication, Prosthesis has been a point of reference in the field of disability studies. It has also been recognized for its prosthetic writing, consisting of academic and autobiographical voices and styles that are artificially attached to one another.

David Wills is professor of French studies at Brown University. He is author of six books and has translated six works by Jacques Derrida, including a new version of Glas, published as Clang by Minnesota in 2020.

On David Wills and Prosthesis

NPB9781517911553
9781517911553
1517911559
Prosthesis by David Wills
David Wills
Posthumanities
New
Paperback
University of Minnesota Press
20210209
392
N/A
Book picture is for illustrative purposes only, actual binding, cover or edition may vary.
This is a new book - be the first to read this copy. With untouched pages and a perfect binding, your brand new copy is ready to be opened for the first time
Trustpilot