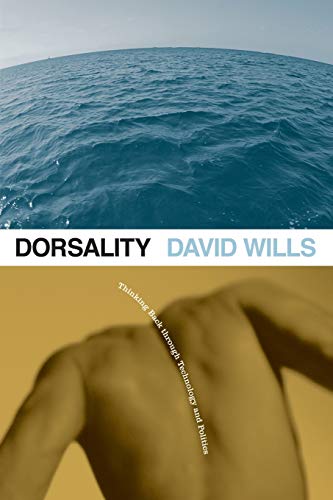 Dorsality: Thinking Back through Technology and Politics by David Wills

In this highly original book David Wills rethinks not only our nature before all technology but also what we understand to be technology. Rather than considering the human being as something natural that then develops technology, Wills argues, we should instead imagine an originary imbrication of nature and machine that begins with a dorsal turn-a turn that takes place behind our back, outside our field of vision.

With subtle and insightful readings, Wills pursues this sense of what lies behind our idea of the human by rescuing Heidegger's thinking from a reductionist dismissal of technology, examining different angles on Levinas's face-to-face relation, and tracing a politics of friendship and sexuality in Derrida and Sade. He also analyzes versions of exile in Joyce's rewriting of Homer and Broch's rewriting of Virgil and discusses how Freud and Rimbaud exemplify the rhetoric of soil and blood that underlies every attempt to draw lines between nations and discriminate between peoples. In closing, Wills demonstrates the political force of rhetoric in a sophisticated analysis of Nietzsche's oft-quoted declaration that God is dead.

Forward motion, Wills ultimately reveals, is an ideology through which we have favored the front-what can be seen-over the aspects of the human and technology that lie behind the back and in the spine-what can be sensed otherwise-and shows that this preference has had profound environmental, political, sexual, and ethical consequences.

David Wills is professor of French and English at the University of Albany (SUNY). He is the author of Prosthesis and Matchbook: Essays in Deconstruction as well as the translator of works by Jacques Derrida, including The Gift of Death.

GOR011549866
9780816653461
0816653461
Dorsality: Thinking Back through Technology and Politics by David Wills
David Wills
Posthumanities
Used - Like New
Paperback
University of Minnesota Press
20080711
280
N/A
Book picture is for illustrative purposes only, actual binding, cover or edition may vary.
The book has been read, but looks new. The book cover has no visible wear, and the dust jacket is included if applicable. No missing or damaged pages, no tears, possible very minimal creasing, no underlining or highlighting of text, and no writing in the margins
Trustpilot