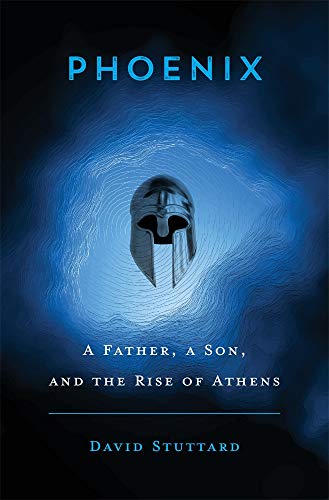 Fifty years before its golden age, Athens was just another city-state in Sparta's shadow. David Stuttard tells the story of the father and son who lifted Athens. Miltiades defeated the Persians at Marathon; Cimon drove them from Greece, revitalized the war-torn city, and moderated its foreign policy, creating the conditions for Athenian greatness.

Phoenix: A Father, a Son, and the Rise of Athens by David Stuttard

A Times Literary Supplement Best Book of the Year

A vivid, novelistic history of the rise of Athens from relative obscurity to the edge of its golden age, told through the lives of Miltiades and Cimon, the father and son whose defiance of Persia vaulted Athens to a leading place in the Greek world.

When we think of ancient Greece we think first of Athens: its power, prestige, and revolutionary impact on art, philosophy, and politics. But on the verge of the fifth century BCE, only fifty years before its zenith, Athens was just another Greek city-state in the shadow of Sparta. It would take a catastrophe, the Persian invasions, to push Athens to the fore. In Phoenix, David Stuttard traces Athens's rise through the lives of two men who spearheaded resistance to Persia: Miltiades, hero of the Battle of Marathon, and his son Cimon, Athens's dominant leader before Pericles.

Miltiades's career was checkered. An Athenian provincial overlord forced into Persian vassalage, he joined a rebellion against the Persians then fled Great King Darius's retaliation. Miltiades would later die in prison. But before that, he led Athens to victory over the invading Persians at Marathon. Cimon entered history when the Persians returned; he responded by encouraging a tactical evacuation of Athens as a prelude to decisive victory at sea. Over the next decades, while Greek city-states squabbled, Athens revitalized under Cimon's inspired leadership. The city vaulted to the head of a powerful empire and the threshold of a golden age. Cimon proved not only an able strategist and administrator but also a peacemaker, whose policies stabilized Athens's relationship with Sparta.

The period preceding Athens's golden age is rarely described in detail. Stuttard tells the tale with narrative power and historical acumen, recreating vividly the turbulent world of the Eastern Mediterranean in one of its most decisive periods.

Cimon, son of Miltiades of Marathon fame, has left virtually no autobiographical trace in the historical record of fifth-century BC Athens and Greece. With masterly intuitiveness and scrupulous scholarship adeptly combined, this always engaging life-and-times biography at last does justice to the achievements of both father and son, achievements that set the tone and the stage for the extraordinary political and cultural flowering that has left its mark on modernity no less than antiquity. -- Paul Cartledge, University of Cambridge
Stuttard writes with such passion and verve of these vibrant years in Athens's history. Such is the power of his storytelling that Miltiades and Cimon-both so often overlooked-soar as triumphantly as any phoenix from the ashes of antiquity. -- Daisy Dunn, author of The Shadow of Vesuvius
In his new book, David Stuttard takes a fresh look at an important but ill-documented period of Athenian history-its rise to greatness in the years following the Persian destruction of the city in 480 and 479. The linchpin of the book is the charismatic leader Cimon. Stuttard sheds light on Cimon with his and Athens's backstory, as well as with the details of his life and career, especially his opposition to democracy, his vision for a more united Greece, his resistance to further encroachment by the Persians, and his determination to maintain Athenian hegemony in the Aegean basin. Eminently readable, this is a book that scholars and lay readers alike will find enjoyable. -- Robin Waterfield, author of Creators, Conquerors, and Citizens: A History of Ancient Greece
Stuttard offers a captivating and at times sparkling narrative underpinned with copious research. By bringing Cimon to life, he makes a persuasive case for assigning him a pivotal role in the realignment of fifth-century Athenian politics. -- Robert Garland, author of How to Survive in Ancient Greece
[A] powerful and substantial account of the Greek city states in their relationships and encounters with each other...[Stuttard] has a penchant for eye-catching images...and he draws the readers in so that they almost experience the excitement, the emotion, the apprehension, even sometimes the fear, of battle scenes. -- Ray Morris * Classics for All *
Covers Athenian history before the rise of Pericles and its fifth-century BC dominance...Stuttard writes with commendably comprehensible fluency. -- Andrew Roberts * Times Literary Supplement *
David Stuttard is an independent scholar, theater director, and Fellow of Goodenough College who has written more than ten books about ancient Greece, including Nemesis: Alcibiades and the Fall of Athens.
NPB9780674988279
9780674988279
0674988272
Phoenix: A Father, a Son, and the Rise of Athens by David Stuttard
David Stuttard
New
Hardback
Harvard University Press
2021-05-28
408
N/A
Book picture is for illustrative purposes only, actual binding, cover or edition may vary.
This is a new book - be the first to read this copy. With untouched pages and a perfect binding, your brand new copy is ready to be opened for the first time
Trustpilot