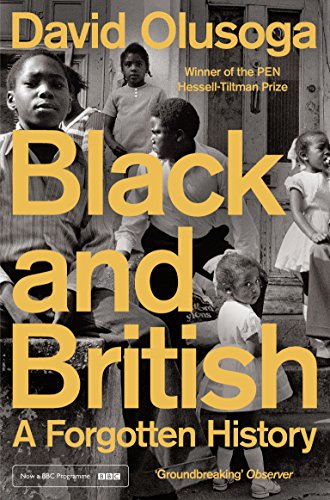 Black and British by David Olusoga

A story of the long relationship between the British Isles and the people of Africa and the Caribbean. It shows that the great industrial boom of the nineteenth century was built on American slavery, and that black Britons fought at Trafalgar and in the trenches of both World Wars.

Black and British: A Forgotten History by David Olusoga

In this vital re-examination of a shared history, historian and broadcaster David Olusoga tells the rich and revealing story of the long relationship between the British Isles and the people of Africa and the Caribbean.

Drawing on new genealogical research, original records, and expert testimony, Black and British reaches back to Roman Britain, the medieval imagination, Elizabethan 'blackamoors' and the global slave-trading empire. It shows that the great industrial boom of the nineteenth century was built on American slavery, and that black Britons fought at Trafalgar and in the trenches of both World Wars. Black British history is woven into the cultural and economic histories of the nation. It is not a singular history, but one that belongs to us all.

Unflinching, confronting taboos and revealing hitherto unknown scandals, Olusoga describes how the lives of black and white Britons have been entwined for centuries.

You could not ask for a more judicious, comprehensive and highly readable survey of a part of British history that has been so long overlooked or denied. David Olusoga, in keeping with the high standards of his earlier books, is a superb guide. -- Adam Hochschild
Groundbreaking. * Observer *
[A] comprehensive and important history of black Britain . . . Written with a wonderful clarity of style and with great force and passion. It is thoroughly researched and there are many interesting anecdotes. -- Kwasi Kwarteng * The Sunday Times *
A radical reappraisal of the parameters of history, exposing lacunae in the nation's version of its past. -- Arifa Akbar * Guardian *
A thrilling tale of excavation -- Colin Grant * Guardian *
[Olusoga] has discovered new and exciting research materials [which] give his writing freshness, originality and compassion . . . [Black and British] will inspire and will come to be seen as a major effort to address one of the greatest silences in British historiography * New Statesman *
Lucid and accessible. * Herald Scotland *
Olusoga's account challenges narrow visions of Britain's past. By tracing the triangulated connections between Britain, America and Africa, he presents black British history in global terms [...] His subjects, even those who barely figure in the historical record, appear as individuals who matter, both in their own right and as historical exemplars. * The London Review of Books *
An insightful, inclusive history of black people in Britain . . . Rich in detail and packed with strong personalities, this is an important contribution to our understanding of life in the UK. * History Revealed *
An insightful, inclusive history of black people in Britain which is rich in detail and packed with strong, interesting characters. -- Stephanie Yeboah * GQ *
Ambitious . . . Long overdue -- Hakim Adi * Spectator *
David Olusoga is a British-Nigerian historian, broadcaster and BAFTA award-winning presenter and filmmaker. His previous books include The Kaiser's Holocaust and The World's War. He was also a contributor to The Oxford Companion to Black British History.
Section - i: List of Illustrations Section - ii: Preface Introduction - iii: 'Years of Distant Wandering' Chapter - One: 'Sons of Ham' Chapter - Two: 'Blackamoors' Chapter - Three: 'For Blacks or Dogs' Chapter - Four: 'Too Pure an Air for Slaves' Chapter - Five: 'Province of Freedom' Chapter - Six: 'The Monster is Dead' Chapter - Seven: Moral Mission Chapter - Eight: 'Liberated Africans' Chapter - Nine: 'Cotton is King' Chapter - Ten: 'Mercy in a Massacre' Chapter - Eleven: 'Darkest Africa' Chapter - Twelve: 'We are a Coloured Empire' Chapter - Thirteen: 'We Prefer their Company' Chapter - Fourteen: 'Swamped' Section - iv: Conclusion Acknowledgements - v: Acknowledgements Section - vi: Bibliography Section - vii: Notes Index - viii: Index
GOR008617418
9781447299769
1447299760
Black and British: A Forgotten History by David Olusoga
David Olusoga
Used - Very Good
Paperback
Pan Macmillan
2017-07-27
624
Winner of PEN Hessell-Tiltman Prize 2017 (UK) Short-listed for Jahalak Prize 2017 (UK) Long-listed for The Orwell Prize 2017 (UK)
Book picture is for illustrative purposes only, actual binding, cover or edition may vary.
This is a used book - there is no escaping the fact it has been read by someone else and it will show signs of wear and previous use. Overall we expect it to be in very good condition, but if you are not entirely satisfied please get in touch with us
Trustpilot