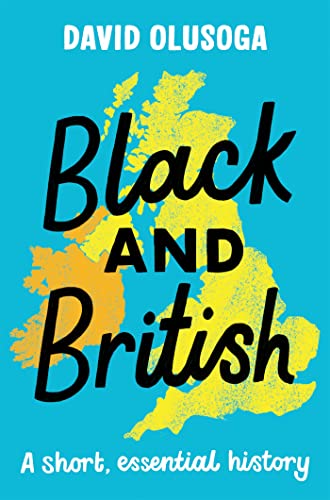 Black and British: A short, essential history by David Olusoga

From Roman times to the present day this is the story of Black British history.

Black and British: A short, essential history by David Olusoga

A short, essential introduction to Black British history for readers of 12+ by award-winning historian and broadcaster David Olusoga.

When did Africans first come to Britain?

Who are the well-dressed black children in Georgian paintings?

Why did the American Civil War disrupt the Industrial Revolution?

These and many other questions are answered in this essential introduction to 1800 years of the Black British history: from the Roman Africans who guarded Hadrian's Wall right up to the present day.

This children's version of the bestseller Black and British: A Forgotten History is Illustrated with maps, photos and portraits.

Macmillan Children's Books will donate 50p from every copy sold to The Black Curriculum.

For readers aged 12+, the book asks some thought-provoking questions and answers them in a smart and thorough style that will teach adults as much as it will children. We can see why it's been called a must-read. * Evening Standard *
In non fiction, David Olusoga's authoritative text has been condensed for children in Black and British: A Short, Essential History (Macmillan). It ranges from the first Africans to come to Britain to the shameful Windrush scandal, and takes in the industrial revolution, cotton grown on slave plantations and the black soldiers who fought for Britain in the first world war. Olusoga's book conveys with calm clarity why all British children should be taught black history * Guardian and Online *
Discovering history is as entertaining as it is informative * People's Friend *
And to the present day: David Olusoga is the best possible person to write Black and British: A Short, Essential History (Pan Macmillan). This new, updated edition of his 2016 book is aimed at younger readers, and it appears at a time when many people are debating the best ways to tell histories of empire and race in the classroom. Olusoga describes it as "the book I wish I had been given to read when I was at school", and I couldn't agree more * Yasmin Khan, BBC History Magazine *
In this new title, Olusoga has distilled and reframed his bestselling Black and British: A Forgotten History for younger readers. Spanning the period from Roman Britain to the modern day, Olusoga's expertly crafted narrative makes history engaging for a new audience in clever and accessible ways. Olusoga has by no means "dumbed-down" his research from Black and British: A Forgotten History, and he forces young people to engage directly with Britain's often-brutal past, discussing overlooked or ignored histories. Black and British: A Short, Essential History clearly demonstrates that Black History is all our history - a vital and important book. * The Scotsman *
Let's face it, some history books can be quite boring unless you're particularly into history, like me, but this highly accessible text from renowned broadcaster and historian David Olusoga is a fascinating eye-opening quick read that you won't be able to put down. Adapted from his best-selling adult version, this clearly written balanced evidence-based history book for 12+ concisely charts the forgotten histories of Black people who have inhabited Britain from Roman times right through to the present day. The most arresting part for me was learning more detail about the logistics of the transatlantic slave trade and Britain's absolutely pivotal role in the process - something that has been completely airbrushed out of the teaching of British history. But no longer - this book sets the record straight and is an essential addition for your libraries. As it's more suitable for teens upwards I won't be writing a long review, though I'd say primary teachers might want to think about reading it for their own knowledge * Cocoa Girl Magazine *
Brilliant, essential, accessible introduction to Black British history. Should be compulsory teaching at school. The author has a wonderful storytelling voice which you can hear coming out of the pages -- It's all about Stories Blog

David Olusoga is a British-Nigerian historian, broadcaster and BAFTA award-winning presenter and filmmaker. He is Professor of Public History at the University of Manchester and a regular contributor to the Guardian, Observer, New StatesmanandBBC History Magazine. His previous books include Black and British, which won the PEN Hessell-Tiltman Prize and the Longman-History Today Trustees Award, The Kaiser's Holocaust and The World's War. He was also a contributor to The Oxford Companion to Black British History. In 2019 he was awarded an OBE for services to history and community integration.

The Black Curriculum is a social enterprise founded in 2019 by young people to address the lack of Black British history in the UK Curriculum. We believe that by delivering arts focused Black history programmes, providing teacher training and campaigning through mobilizing young people, we can facilitate social change. Our programmes are for all young people aged 8-16 and aim to equip young people with a sense of identity, and the tools for a diverse landscape. We are working towards changing the national curriculum and building a sense of identity in every young person in the UK.

GOR010862245
9781529063394
1529063396
Black and British: A short, essential history by David Olusoga
David Olusoga
Used - Very Good
Paperback
Pan Macmillan
2020-10-01
176
N/A
Book picture is for illustrative purposes only, actual binding, cover or edition may vary.
This is a used book - there is no escaping the fact it has been read by someone else and it will show signs of wear and previous use. Overall we expect it to be in very good condition, but if you are not entirely satisfied please get in touch with us
Trustpilot