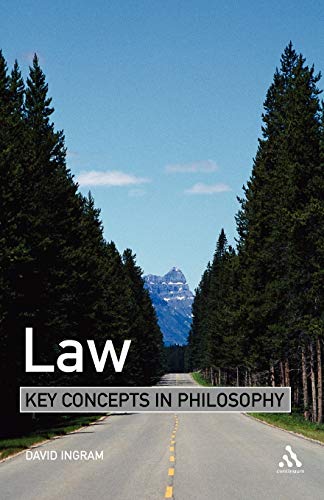 Key Concepts in Philosophy is a series of concise, accessible and engaging introductions to the core ideas and subjects encountered in the study of philosophy. Specially written to meet the needs of students and those with an interest in, but little prior knowledge of, philosophy, these books open up fascinating, yet sometimes difficult ideas. The series builds to give a solid grounding in philosophy and each book is also ideal as a companion to further study. The philosophy of law - inquiry into the origins, nature and theory of laws and legal principles, and those concepts that structure the practice of law - is of great importance in moral and political philosophy, as well as being a major area of philosophical concern in its own right. Clear, concise and comprehensive, this is the ideal introduction to the philosophy of law for those studying it for the first time. Drawing upon both the analytic Anglo-American and Continental schools of philosophy, Law: Key Concepts in Philosophy summarises the work of key thinkers in the philosophy of law, including Rousseau, Hobbes, Austin, Hegel, Habermas, Mill, Marx, Dworkin, Hart and Rawls. It provides lucid and thorough explication and analysis of central concerns in legal philosophy, covering criminal law, civil law and constitutional law. Finally, the text also addresses key issues in contemporary philosophy of law, including human rights, international law and questions of race and gender.
This is an essential text for philosophy students, pre-law students, and for students in their first year of law school. In its seven chapters, this volume offers thoughtful reflections on such topics as the concept of law, law and morality, constitutional law, crime and punishment, blind justice and the debate between equal protection under the law and freedom of speech, private law and the limits of economic rationality, and concludes challenges...The author has produced a much-needed resource that by its nature is complex and unwieldy. Clearly written, concise, and comprehensive, the author's approach is a case-oriented and problem-solving one that greatly benefits the student who is charged with exploring the nuances in the competing points of view. -- American Reference Books Annual
mention- Book News Inc./ August 2007
David Ingram's Law: Key Concepts in Philosophy captures virtually the entire realm of modern thought that forms the philosophical basis for civilized society structured on the basis of constitutions and laws. Wonderfully researched and beautifully articulated, Ingram's volume covers an entire spectrum of dimensions that range from economic, political, international, ethical, and other aspects relating to modern society. This book is highly recommended for a general reader, for an introductory course on Law and Philosophy, or for the serious scholar.- Steven Napier, Metapsychology Online Reviews -- Metapsychology Online Reviews
...the volume is high in both quality and utility. Summing Up: Highly recommended. Upper-division undergraduates through practitioners. -M. Berheide, CHOICE, October 2007 -- M. Berheide
David Ingram is Professor of Philosophy at Loyola University Chicago, USA. He is the author (with Jennifer Parks) of The Complete Idiot's Guide to Understanding Ethics.
1. What is Law?; 2. Law and Morality; 3. Constitutional Law; 4. Crime and Punishment; 5. Blind Justice: Race, Gender, Sex and the Limits of Legal Coercian; 6. Private Law and the Limits of Logic and Economics; 7. Conclusion: The Rule of Law as Ideology.
GOR004012938
9780826478221
0826478220
Law: Key Concepts in Philosophy by David Ingram
David Ingram
Key Concepts in Philosophy
Used - Very Good
Paperback
Bloomsbury Publishing PLC
20061102
230
N/A
Book picture is for illustrative purposes only, actual binding, cover or edition may vary.
This is a used book - there is no escaping the fact it has been read by someone else and it will show signs of wear and previous use. Overall we expect it to be in very good condition, but if you are not entirely satisfied please get in touch with us
Trustpilot