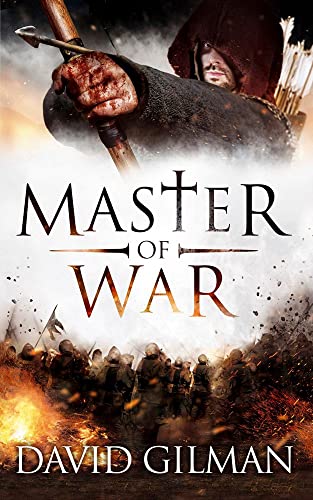 Master of War by David Gilman

Amid the carnage of the 100 Years' War, the bloodiest conflict in medieval warfare, a young English archer confronts his destiny.

Master of War by David Gilman

Amid the carnage of the 100 Years War - the bloodiest confilct in medieval history - a young English archer confronts his destiny...

England, 1346: For Thomas Blackstone the choice is easy - dance on the end of a rope for a murder he did not commit, or take up his war bow and join the king's invasion.

As he fights his way across northern France, Blackstone learns the brutal lessons of war - from the terror and confusion of his first taste of combat, to the savage realities of siege warfare.

'I'm totally bedazzled. I'd never thought that another writer could rival Bernard Cornwell when it came to dramatizing battles, but David is giving him a real run for his money. The battle scenes are so realistic it is almost like time-traveling, though definitely not for the faint of heart. Thomas is an incredibly appealing and sympathetic character. And the level of suspense is ratcheted up to a truly brutal level, for it is impossible for a reader to predict what will be coming next' Sharon Penman.
'I see flashes of brilliance that surpass Bernard Cornwell' The Bookbag.
'The 100 Years' War is the new Rome for historical adventure novels' Ben Kane.
'Page-turning and gritty' Daily Mail.
'If you only read one historical debut this year, make it this one. The prose is sharper than a bodkin arrow, the pace faster than thought and it was a book I just couldn't put down' Falcata Times.
'Like a punch from a mailed fist, MASTER OF WAR gives a true taste of the Hundred Years War. It is a gripping chronicle of pitched battle, treachery and cruelty. The stench and harshness of medieval life is ever present' Robert Fabbri, bestselling author of the Vespasian series.

David Gilman enjoyed many careers - including firefighter, paratrooper and photographer - before turning to writing full time. He is an award-winning author and screenwriter.

GOR005259299
9781781850107
1781850100
Master of War by David Gilman
David Gilman
Master of War
Used - Very Good
Hardback
Head of Zeus
2013-08-01
496
N/A
Book picture is for illustrative purposes only, actual binding, cover or edition may vary.
This is a used book - there is no escaping the fact it has been read by someone else and it will show signs of wear and previous use. Overall we expect it to be in very good condition, but if you are not entirely satisfied please get in touch with us
Trustpilot