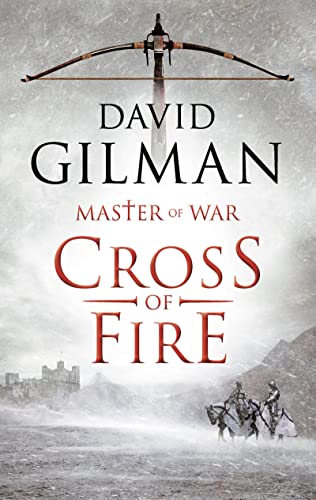 Cross of Fire by David Gilman

The Hundred Years War still rages on and the French army thirsts for Thomas Blackstone's blood. The sixth instalment in the epic Master of War series.

Cross of Fire by David Gilman

After decades of successful campaigning in France, Thomas Blackstone, once a common archer, has risen to become Edward III's Master of War.

But the title is as much a curse as a blessing. Success has brought few rewards: his family - bar his son Henry - is dead, slaughtered; his enemies only multiply. Death, in so many guises, beckons.

As he battles to enforce his King's claim to French territory, Blackstone will assault an impregnable fortress, he'll become embroiled in a feud between French aristocrats, he'll be forced into pitched battle in the dead of winter... and he'll be asked to pay an impossible price to protect something much more precious to the King than mere land.

All the while, out of the east, a group of trained killers, burning with vengeance, draw ever closer.

'If you're a fan of historical fiction you'll be a fan of David Gilman's series ... A bloody good war gripper' Weekend Sport.

David Gilman enjoyed many careers - including firefighter, paratrooper and photographer - before turning to writing full time. He is an award-winning author and screenwriter.

GOR010492266
9781788544948
1788544943
Cross of Fire by David Gilman
David Gilman
Master of War
Used - Like New
Hardback
Head of Zeus
2020-02-06
480
N/A
Book picture is for illustrative purposes only, actual binding, cover or edition may vary.
The book has been read, but looks new. The book cover has no visible wear, and the dust jacket is included if applicable. No missing or damaged pages, no tears, possible very minimal creasing, no underlining or highlighting of text, and no writing in the margins
Trustpilot