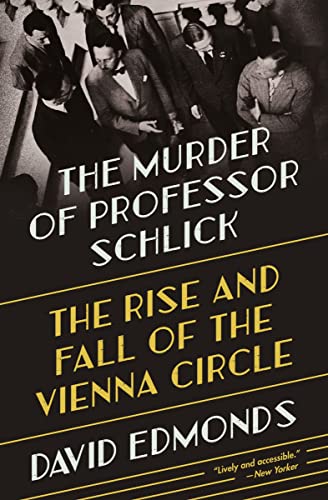 The Murder of Professor Schlick by David Edmonds

The Murder of Professor Schlick: The Rise and Fall of the Vienna Circle by David Edmonds

From the author of Wittgenstein's Poker and Would You Kill the Fat Man?, the story of an extraordinary group of philosophers during a dark chapter in Europe's history

On June 22, 1936, the philosopher Moritz Schlick was on his way to deliver a lecture at the University of Vienna when Johann Nelboeck, a deranged former student of Schlick's, shot him dead on the university steps. Some Austrian newspapers defended the madman, while Nelboeck himself argued in court that his onetime teacher had promoted a treacherous Jewish philosophy. David Edmonds traces the rise and fall of the Vienna Circle-an influential group of brilliant thinkers led by Schlick-and of a philosophical movement that sought to do away with metaphysics and pseudoscience in a city darkened by fascism, anti-Semitism, and unreason.

The Vienna Circle's members included Otto Neurath, Rudolf Carnap, and the eccentric logician Kurt Goedel. On its fringes were two other philosophical titans of the twentieth century, Ludwig Wittgenstein and Karl Popper. The Circle championed the philosophy of logical empiricism, which held that only two types of propositions have cognitive meaning, those that can be verified through experience and those that are analytically true. For a time, it was the most fashionable movement in philosophy. Yet by the outbreak of World War II, Schlick's group had disbanded and almost all its members had fled. Edmonds reveals why the Austro-fascists and the Nazis saw their philosophy as such a threat.

The Murder of Professor Schlick paints an unforgettable portrait of the Vienna Circle and its members while weaving an enthralling narrative set against the backdrop of economic catastrophe and rising extremism in Hitler's Europe.

One of New Statesman's Books of the Year 2020
A Times Literary Supplement Book of the Year 2021
[A] compelling biography.---Oliver Moody, The Times
[L]ively and accessible. . . . [Edmond's] research has also uncovered important new biographical information, including about [the Vienna Circle's] lesser-known female members.---Adam Kirsch, New Yorker
As pacy as a thriller.---Joe Humphreys, Irish Times
[An] exemplary [piece] of intellectual history, doing meticulous justice to the ideas and engrossing about the personalities involved.---Alan Ryan, New Statesman
A clear accessible introduction to the complexities of logical positivism . . . [Edmonds] brilliantly illuminates why and how the philosophy burned so brightly.---Clare Clark, Standpoint
A readable popular history of the Circle that deftly integrates the ideas and lives of its members with the story of the Viennese milieu in which it emerged and its destruction. . . . [Edmonds'] historical narrative is clear, reliable and thoroughly readable - gripping, even, in places.---Tom Stern, Literary Review
A stimulating, scintillating new book on the Vienna Circle.---Daniel Johnson, The Critic
[An] engrossing and eminently readable history of the circle.---David Conway, Jewish Chronicle
[Edmonds manages to] combine the biographical and historical with the philosophical, without getting too technical. . . . It's quite a poignant book.---Nigel Warburton, FiveBooks
A cracking read.---Diane Coyle, Enlightened Economist
I very much enjoyed this book, and found its direct style refreshing, and I hope it will serve as a model for others. [Edmonds] actually tells you what you want to know!---Tyler Cowen, Marginal Revolution
Absorbing. . . . so fascinating and relevant now.---Thomas Filbin, The Arts Fuse
An accessible introduction to the group of philosophers and scientists who formed the influential Vienna Circle in the 20th century. . . . Edmonds tells its story thoughtfully in this fascinating mix of philosophy, biography and cultural history.---David Herman, Jewish Renaissance
Edmonds has written a compelling, captivating, and easily approachable book on the history of the Vienna Circle. He is witty, engaging, knows where to put emphasis, and how to draw lively pictures of those philosophers that are still too often conceived as technically minded abstract logicians. . . .Edmonds' book will make you understand why the Vienna Circle was so important back in the 1920s, and still important in the 2020s.---Adam Tamas Tuboly, Review of History of Philosophy of Science Books
[A] lively new book. . . .Edmonds draws unexpected connections within the sprawling web of thinkers and artists in interwar Vienna. . . bringing to life the artistic and political flavour of those coffee-house debates---Jonathan Egid, Times Literary Supplement
An always-readable obituary for the philosophers who sought a common basis for western thought while communism and Nazism were on the bloody rise.---Frederic Raphael, Times Literary Supplement
David Edmonds is the coauthor, with John Eidinow, of the bestselling Wittgenstein's Poker as well as Rousseau's Dog and Bobby Fischer Goes to War, and the author of Would You Kill the Fat Man? (Princeton). Cofounder, with Nigel Warburton, of the popular Philosophy Bites podcast series, he is a distinguished research fellow at the Oxford Uehiro Centre for Practical Ethics. Twitter @DavidEdmonds100
NPB9780691164908
9780691164908
0691164908
The Murder of Professor Schlick: The Rise and Fall of the Vienna Circle by David Edmonds
David Edmonds
New
Hardback
Princeton University Press
2020-10-13
336
N/A
Book picture is for illustrative purposes only, actual binding, cover or edition may vary.
This is a new book - be the first to read this copy. With untouched pages and a perfect binding, your brand new copy is ready to be opened for the first time
Trustpilot