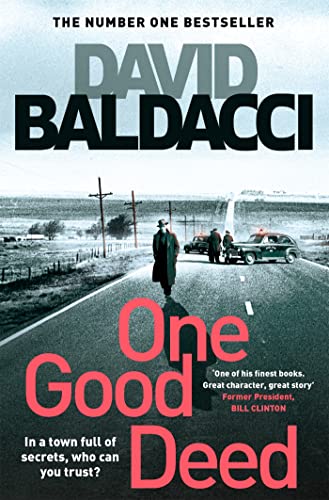 One Good Deed by David Baldacci

One Good Deed by David Baldacci

Murder and family secrets, a touch of romance and deeply-felt revenge - with the twist of all twists - make up the perfect page-turning thriller, One Good Deed, from one of the world's bestselling thriller writers, David Baldacci.

'One of his finest books. Great character, great story, great portrait of an era'
Bill Clinton

In 1949, Aloysius Archer arrives in the dusty Southern town of Poca City. He has nothing but a handful of dollars, the clothes he's wearing and an appointment with his new parole officer. After his wartime experiences in Italy and a prison sentence for a crime he didn't commit, Archer is looking for a fresh start and a peaceful life.

On his first night of freedom, Archer meets local business tycoon Hank Pittleman, who promises Archer handsome compensation to work as his debt collector. Yet Archer takes on more than he bargains for, as he becomes embroiled in a long-running feud between the drought-struck town's most dangerous residents. When one of them dies, the authorities label Archer as their number one suspect.

A bloody game is being played above and below the law. Everybody playing has a deeply buried secret, and Archer must uncover them all - if he's to avoid going back behind bars.

One of his finest books. Great character, great story, great portrait of an era -- Bill Clinton
One Good Deed represents David Baldacci's move into historical crime with a new character, ex- jailbird Aloysius Archer . . . Unsurprisingly, the talented Baldacci proves to be as adept in this new venture as he is in his contemporary-set novels * Financial Times *
A fast-paced investigation with dark secrets, unexpected twists, well-drawn characters and an intriguing plot * Candis Magazine *
A mile-a-minute read that proves once again why David Baldacci has readers the world over flocking for more -- Jane Harper, bestselling author of The Dry
Alternately chilling, poignant, and always heart-poundingly suspenseful -- Scott Turow
David Baldacci is one of the all-time best thriller authors -- Lisa Gardner
A multi-layered protagonist; a plot as deep and twisty as the setting -- Kathy Reichs
Mystery and suspense surround a fabulous new character in an enticing, engaging thriller that does not disappoint * Live and Deadly *

David Baldacci is one of the world's bestselling and favourite thriller writers. With over 130 million copies in print, his books, including Long Road to Mercy and Redemption are published in over eighty territories and forty-five languages, and have been adapted for both feature-film and television. David is also the co-founder, along with his wife, of the Wish You Well Foundation (R), a non-profit organization dedicated to supporting literacy efforts across the US.

GOR010430582
9781529027501
1529027500
One Good Deed by David Baldacci
David Baldacci
Used - Very Good
Paperback
Pan Macmillan
2020-03-05
608
N/A
Book picture is for illustrative purposes only, actual binding, cover or edition may vary.
This is a used book - there is no escaping the fact it has been read by someone else and it will show signs of wear and previous use. Overall we expect it to be in very good condition, but if you are not entirely satisfied please get in touch with us
Trustpilot