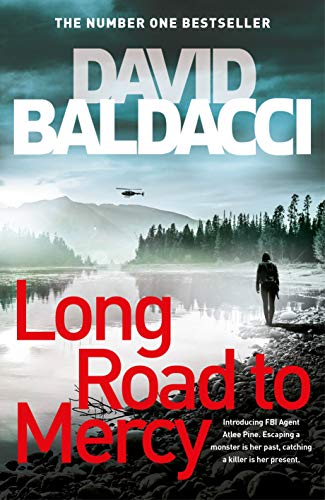 The Number One Bestseller.

It is thirty years since FBI special agent Atlee Pine's twin sister, Mercy, was taken from the room they shared as young children. Notorious serial killer Daniel James Tor, was caught and convicted of other murders, and while there's no proof, Atlee believes he knows what happened to Mercy. Tor still resides in a high-security prison in Colorado.

Assigned to the remote wilds of the western United States, Atlee has never stopped the search for her sister, and, wracked with survivor's guilt, she has spent her life hunting down those who hurt others. She will always ask herself, `Why her, and not me?'.

Now, Atlee is called in to investigate a case in the Grand Canyon when a mule is found dead with strange carvings on its body, and its rider missing. She knows about killers and perhaps understands them better than any profiler in the FBI, but it soon becomes clear that she will need to put her skills to the ultimate test in this investigation.

It seems that Atlee will now have to confront a new monster.

And face the one of her nightmares.

David Baldacci is one of the world's bestselling and favourite thriller writers. With over 130 million copies in print, his books are published in over 80 territories and 45 languages, and have been adapted for both feature-film and television. David is also the co-founder, along with his wife, of the Wish You Well Foundation (R), a non-profit organization dedicated to supporting literacy efforts across the US.

GOR009506455
9781509874330
150987433X
Long Road to Mercy by David Baldacci
David Baldacci
Atlee Pine series
Used - Very Good
Hardback
Pan Macmillan
2018-11-13
416
N/A
Book picture is for illustrative purposes only, actual binding, cover or edition may vary.
This is a used book - there is no escaping the fact it has been read by someone else and it will show signs of wear and previous use. Overall we expect it to be in very good condition, but if you are not entirely satisfied please get in touch with us
Trustpilot