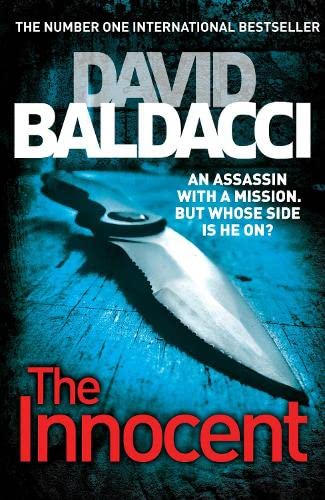 An assassin with a mission. But whose side is he on?

The Innocent is another action-packed thriller from David Baldacci,one of the world's most popular writers

Back in DC after successful missions in Edinburgh and Tangier, assassin Will Robie sees his latest assignment, to eliminate a US government employee, go badly wrong. What had she done, or what did she know? Robie is now a wanted man.

But it seems that he's not the only one on the run. Young teenager Julie Getty is devastated by the inexplicable murder of her parents in their home. Who wanted them dead, and why, is a mystery. But Julie is smart enough to believe that their killer will come after her. Robie and Julie meet when he saves her from an attempt on her life as they were trying to leave town.

The police investigating the hit start to take an interest in Robie. He's particularly attracting the interest of Special Agent Nicole Vance, who believes that the two cases are connected. Robie finds himself in a dangerous position as he is tasked to investigate a crime at which he was present. Does he need to change sides to save lives - including his own?

The Innocent is the first novel in David Baldacci's blockbuster Will Robie series.

David Baldacci is one of the world's bestselling and favourite thriller writers. With over 130 million copies in print, his books are published in over eighty territories and forty-five languages, and have been adapted for both feature-film and television. He has established links to government sources, giving his books added authenticity. David is also the co-founder, along with his wife, of the Wish You Well Foundation (R), a non-profit organization dedicated to supporting literacy efforts across the US. Trust him to take you to the action.
GOR003736626
9780230749252
0230749259
The Innocent by David Baldacci
David Baldacci
Will Robie series
Used - Very Good
Hardback
Pan Macmillan
2012-04-26
432
N/A
Book picture is for illustrative purposes only, actual binding, cover or edition may vary.
This is a used book - there is no escaping the fact it has been read by someone else and it will show signs of wear and previous use. Overall we expect it to be in very good condition, but if you are not entirely satisfied please get in touch with us
Trustpilot