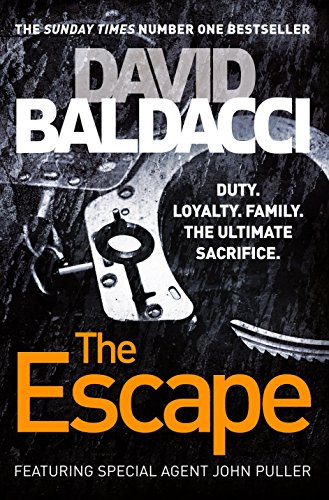 The Escape by David Baldacci

The Escape by David Baldacci

From the Sunday Times number one bestselling author, David Baldacci, The Escape is the third title in this fast-paced, breathtaking series.

Military CID investigator John Puller has returned from his latest case to learn that his brother, Robert, once a major in the United States Air Force and an expert in nuclear weaponry and cyber-security, has escaped from the Army's most secure prison. Preliminary investigations show that Robert - convicted of treason - may have had help in his breakout. Now he's on the run, and he's the military's number one target.

John Puller has a dilemma. Which comes first: loyalty to his country, or to his brother? Blood is thicker than water, but Robert has state secrets which certain people will kill for. John does not know for sure the true nature of Robert's crimes, nor if he's even guilty. It quickly becomes clear, however, that his brother's responsibilities were powerful and far-reaching.

With the help of US intelligence officer Veronica Knox, both brothers move closer to the truth from their opposing directions. As the case begins to force John Puller into a place he thought he'd never be - on the other side of the law - even his skills as an investigator, and his strength as a warrior, might not be enough to save him. Or his brother.

CIN001359471
9781447225317
1447225317
The Escape by David Baldacci
David Baldacci
John Puller series
Used - Very Good
Hardback
Pan Macmillan
2014-11-20
400
N/A
Book picture is for illustrative purposes only, actual binding, cover or edition may vary.
This is a used book - there is no escaping the fact it has been read by someone else and it will show signs of wear and previous use. Overall we expect it to be in very good condition, but if you are not entirely satisfied please get in touch with us
Trustpilot