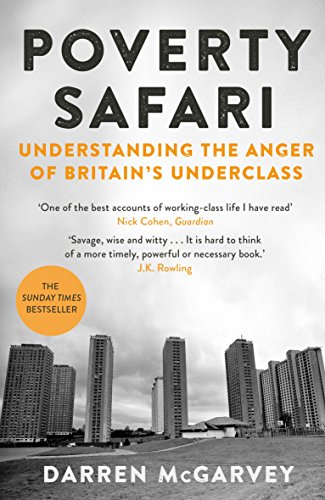 A prize-winning, breakout bestseller, with famous fans including J. K. Rowling, Irvine Welsh and Ken Loach. This powerful, moving and important book will change how you think about poverty.

The Sunday Times Top Ten bestseller.
Winner of the Orwell Prize 2018.
Named the most 'Rebellious Read of the 21st Century' in a Scottish Book Trust poll.

Darren McGarvey has experienced poverty and its devastating effects first-hand. He knows why people from deprived communities all around Britain feel angry and unheard. And he wants to explain . . .

So he invites you to come on a safari of sorts. But not the kind where the wildlife is surveyed from a safe distance. This book takes you inside the experience of poverty to show how the pressures really feel and how hard their legacy is to overcome.

Arguing that both the political left and right misunderstand poverty as it is actually lived, McGarvey sets out what everybody - including himself - could do to change things. Razor-sharp, fearless and brutally honest, Poverty Safari is an unforgettable insight into modern Britain.

Part memoir, part polemic, this is a savage, wise and witty tour-de-force. An unflinching account of the realities of systemic poverty, Poverty Safari lays down challenges to both the left and right. It is hard to think of a more timely, powerful or necessary book. -- J.K. Rowling
Nothing less than an intellectual and spiritual rehab manual for the progressive left. -- Irvine Welsh
Another cry of anger from a working class that feels the pain of a rotten, failing system. Its value lies in the strength it will add to the movement for change. -- Ken Loach
Poverty Safari is an important and powerful book. -- Nicola Sturgeon
Poverty Safari documents in vivid, piercing and frequently funny prose, the reality of growing up in Pollok and the consequences of a chaotic family life -- Stephen McGinty * Sunday Times *
By his own account, Darren McGarvey's first twenty-five years were a real-life version of Trainspotting . . . Poverty Safari [is] a painfully honest autobiographical study of deprivation and how society should deal with it . . . But what has made McGarvey such a particular figure of attention is his political message . . . [McGarvey] seems to offer an antidote to populist anger that transcends left and right . . . his urgently written, articulate and emotional book is a bracing contribution to the debate about how to fix our broken politics. * Financial Times *
Poverty Safari is one of the best accounts of working-class life I have read. McGarvey is a rarity: a working-class writer who has fought to make the middle-class world hear what he has to say. -- Nick Cohen * Guardian *
If The Road to Wigan Pier had been written by a Wigan miner and not an Etonian rebel, this is what might have been achieved. McGarvey's book takes you to the heart of what is wrong with the society free market capitalism has created. -- Paul Mason
The man seems to be on his way to becoming one of the most compelling and original voices in Scotland's, and maybe Britain's, public debate. If Scotland's underclass could speak in a single, articulate, authentic voice to communicate to the rest of us what it's like to be poor, isolated, brutalised, lost, it would sound very much like this. * Scottish Daily Mail *
Raw, powerful and challenging. -- Kezia Dugdale
A blistering analysis of the issues facing the voiceless and the social mechanisms that hobble progress, all wrapped up in an unput-downable memoir. -- Denise Mina
Describes in unflinching detail the realities of growing up poor in Britain and sets out to challenge the various ways in which poverty is represented in the media and on both sides of the political divide * Guardian *
A raw account of his own deprivation and addiction and a powerful political argument. * Guardian *
The standout, authentic voice of a generation . . . the world is looking for eloquent voices like McGarvey's to explain things * Herald (Scotland) *
Utterly compelling. -- Ian Rankin * New Statesman *
Darren McGarvey aka Loki grew up in Pollok. He is a writer, performer, columnist and former rapper-in-residence at Police Scotland's Violence Reduction Unit. He has presented eight programmes for BBC Scotland exploring the root causes of anti-social behaviour and social deprivation. His novel Poverty Safari won the Orwell Prize 2018.
GOR009329056
9781529006346
1529006341
Poverty Safari: Understanding the Anger of Britain's Underclass by Darren McGarvey
Darren McGarvey
Used - Very Good
Paperback
Pan Macmillan
2018-08-09
240
N/A
Book picture is for illustrative purposes only, actual binding, cover or edition may vary.
This is a used book - there is no escaping the fact it has been read by someone else and it will show signs of wear and previous use. Overall we expect it to be in very good condition, but if you are not entirely satisfied please get in touch with us
Trustpilot