The Indian Army and the End of the Raj Daniel Marston (Australian National University, Canberra) 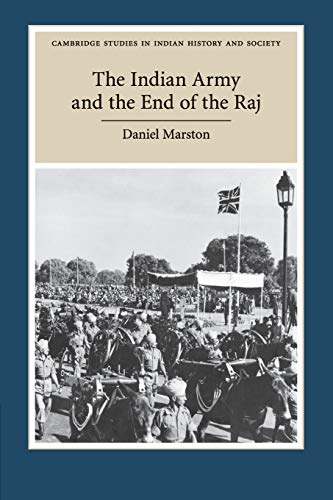 The Indian Army and the End of the Raj by Daniel Marston (Australian National University, Canberra)

A unique examination of the role of the Indian army in post-World War II India in the run-up to Partition. Daniel Marston draws upon extensive archival research and interviews with veterans of the events of 1947 to provide fresh insight into the final days of the British Raj.

The Indian Army and the End of the Raj by Daniel Marston (Australian National University, Canberra)

The Partition of British India in 1947 resulted in the establishment of the independent states of India and Pakistan and the end of the British Raj. The decision to divide British India along religious lines led to widespread upheaval and communal violence in the period leading up to and following the official day of independence, 15 August 1947. In this book, Daniel Marston provides a unique examination of the role of the Indian army in post-World War II India. He draws upon extensive research into primary source documents and interviews with veterans of the events of 1947 to provide fresh insight into the vital part that the Indian Army played in preserving law and order in the region. This rigorous book fills a significant gap in the historiography of the British in India and will be invaluable to those studying the British Empire and South Asia more generally.
'The 'Transfer of Power' in India has often been written about in terms of politics and personalities, but lingering largely unnoticed in the background has been a crucial, unasked question: why did the Indian Army, under stresses as powerful as any army in modern history has experienced, not simply disintegrate, throwing the subcontinent into total chaos? Mixing massive archival research, interviews with surviving participants, British, Indian and Pakistani, and a profound empathy for the subject, Marston answers that question in a book that will certainly readjust perspectives on the end of the Raj, and be essential reading for any serious student of that epochal event.' Raymond Callahan, FRHS, Professor Emeritus, University of Delaware
'Daniel Marston has given us in this volume some deep insights into how the former British Indian Army went through a transformation to become the truly national armies of two independent states whose foreign and defence policies were very different to those of their former Imperial master. This volume is built on prodigious, accurate documentary work and hundreds of interviews with surviving British, Indian and Pakistani soldiers of those times. It is a complex, fascinating and well-told story, and reinforces in the mind of the reader the value of the old British model of military-political relations. At the same time, it demonstrates the importance of the liberal post-imperial policy which permitted and encouraged the transfer of power while still retaining a high military capability which was to be put to the test all too soon.' Robert O'Neill, Chichele Professor of the History of War, All Souls College, University of Oxford
'Daniel Marston's superb history shows how the Indian Army stayed cohesive and effective in the face of external enemies and the near-collapse of the colonial state. It is a story with valuable lessons for policymakers looking to understand what keeps armies together - and out of politics - in democratic transitions.' Steven I. Wilkinson, Nilekani Professor of India and South Asian Studies and Professor of Political Science and International Affairs, Yale University, Connecticut
'Marston's work is eminently readable and presents a very clear analysis of what strengths the Army of the Raj was able to draw upon to overcome civil and political disorder. His use of a myriad of primary sources further reinforces his thesis and position. His is not a study of the individual soldier but their reminisces and that of their peers and commanders are the basis upon which the work is built ... Marston's book is an outstanding work and deserves the closest of review.' Chris Buckham, War History Online (warhistoryonline.com)
Daniel Marston is Professor of Military Studies in the Strategic and Defence Studies Centre at the Australian National University, Canberra. He is also the Principal of the Military and Defence Studies Program at the Australian Command and Staff College in Canberra, Australia. He has also been a Visiting Fellow with the Oxford Leverhulme Programme on the Changing Character of War. His first book Phoenix from the Ashes, an in-depth assessment of how the British/Indian Army turned defeat into victory in the Burma campaign of the Second World War, won the Field Marshal Templer Medal Book Prize in 2003. He completed his doctorate in the history of war at Balliol College, Oxford, and is a Fellow of the Royal Historical Society.
Introduction; 1. The bedrock of the Raj: the Indian Army before 1939; 2. The performance of the Indian army in the Second World War; 3. Question of loyalty? The Indian National Army and the Royal Indian Navy mutiny; 4. The Indian Army in French Indo-China and the Netherlands East Indies 1945-6; 5. 1946, the year of difficulty: internal security and the rise of communal violence; 6. Demobilisation, nationalisation and division of the army in the midst of chaos; 7. 1947: the year of reckoning and the end of the Raj; Conclusion: the end of the British Indian Army; Bibliography; Index.
NLS9781316635513
9781316635513
1316635511
The Indian Army and the End of the Raj by Daniel Marston (Australian National University, Canberra)
Daniel Marston (Australian National University, Canberra)
Cambridge Studies in Indian History and Society
New
Paperback
Cambridge University Press
2016-11-17
400
N/A
Book picture is for illustrative purposes only, actual binding, cover or edition may vary.
This is a new book - be the first to read this copy. With untouched pages and a perfect binding, your brand new copy is ready to be opened for the first time
Trustpilot