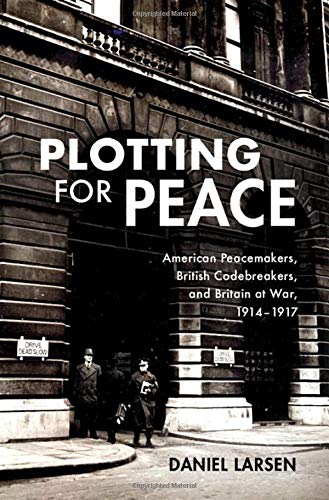 Plotting for Peace by Daniel Larsen (University of Cambridge)

With Britain by late 1916 facing the prospect of an economic crisis and increasingly dependent on the US, rival factions in Asquith's government battled over whether or not to seek a negotiated end to the First World War. In this riveting new account, Daniel Larsen tells the full story for the first time of how Asquith and his supporters secretly sought to end the war. He shows how they supported President Woodrow Wilson's efforts to convene a peace conference and how British intelligence, clandestinely breaking American codes, aimed to sabotage these peace efforts and aided Asquith's rivals. With Britain reading and decrypting all US diplomatic telegrams between Europe and Washington, these decrypts were used in a battle between the Treasury, which was terrified of looming financial catastrophe, and Lloyd George and the generals. This book's findings transform our understanding of British strategy and international diplomacy during the war.
'This ground-breaking book transforms our understanding of British policy and American mediation during the First World War, incorporating the missing dimension of spies, codes and intelligence, together with new insights from economic history. It corrects many of the distortions in our current understanding of this crucial conflict.' Richard J. Aldrich, author of GCHQ: The Uncensored Story of Britain's Most Secret Intelligence Agency
'Dr Larsen challenges assumptions both about how to write international history and about the events of 1914-1917. Using the tools of political, diplomatic, economic and intelligence history, he analyses the failed American mediation attempts, and argues that long-held historical beliefs are entirely wrong. It is a very stimulating book.' Kathleen Burk, author of The Lion and the Eagle: The Interaction of the British and American Empires 1783-1972
'A bold reinterpretation of Britain and America in the Great War, probing anew whether the struggle had to be fought to a finish. It reconsiders Woodrow Wilson's mediation efforts in 1914-17 and offers revisionist portraits of Asquith and Lloyd George.' David Reynolds, author of Island Stories: Britain and its History in the Age of Brexit
'Daniel Larsen provides us with by far the best account of Anglo-American relations in the crucial months preceding America's entry into the First World War. Challenging received interpretations, compellingly argued, and eloquently written, it blends finance and secret intelligence with diplomacy and high politics.' David Stevenson, author of 1917: War, Peace, and Revolution
'Fascinating ... helps to redress the balance, away from howitzers and trenches, and towards understanding.' Peter Hitchens, The Mail on Sunday
'A memorable lesson in the sheer contingency of history and how the lives and deaths of millions can depend on the decisions of a few men.' Oliver Moody, The Times
Daniel Larsen is College Lecturer in History at Trinity College, University of Cambridge.
Preface; Acknowledgements; Introduction; 1. The First Year of War (August 1914-August 1915); 2. Strategy (August-December 1915); 3. Negotiations (January-March 1916); 4. Deliberations (March-May 1916); 5. The Gamble (June-August 1916); 6. The Knock-out Blow (September-October 1916); 7. The Fall of Asquith (October-December 1916); 8. Peace Moves (December 1916-January 1917); 9. The Zimmermann Telegram and Wilson's Move to War (February-April 1917); Conclusion.
GOR011262041
9781108486682
1108486681
Plotting for Peace: American Peacemakers, British Codebreakers, and Britain at War, 1914-1917 by Daniel Larsen (University of Cambridge)
Daniel Larsen (University of Cambridge)
Used - Very Good
Hardback
Cambridge University Press
20210401
444
N/A
Book picture is for illustrative purposes only, actual binding, cover or edition may vary.
This is a used book - there is no escaping the fact it has been read by someone else and it will show signs of wear and previous use. Overall we expect it to be in very good condition, but if you are not entirely satisfied please get in touch with us
Trustpilot