Pack Up Your Troubles Cynthia Harrod-Eagles 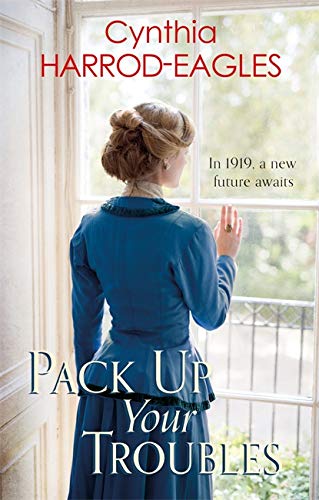 Pack Up Your Troubles by Cynthia Harrod-Eagles

The sixth and final book in the War at Home series by the author of The Morland Dynasty novels. Set against the evocative backdrop of World War I, this is an epic family drama featuring the Hunters and their servants

Pack Up Your Troubles: War at Home, 1919 by Cynthia Harrod-Eagles

The final book in Cynthia's War at Home series

1919: The war is over, but peace is yet to come. As men are demobbed, women must give up positions that gave them freedom.

Edward is given an important job at the Peace Conference in Paris, but it means more lonely months away from Beattie and his hoped-for reconciliation. Fred's unit is sent to the Rhine, and Cook feels a
guilty relief that her uprooting has been postponed. Laura's friend Ransley volunteers for a further six months, and rather than go home, Laura finds a new outlet: conducting guided tours of the battlefields.

In England there are strikes and unrest, hardship and widespread unemployment, and everywhere the sight of the wounded to remind the nation of what it has paid for peace. But as the first, difficult year post-war comes to an end, there are great changes afoot for the Hunter household, wonderful surprises, and the promise of a new start.

Pack Up Your Troubles is the sixth and final book in the War at Home series by Cynthia Harrod-Eagles, author of the much-loved Morland Dynasty novels. Set against the real events of 1919, at home and on the front, this concludes the vivid and rich family drama featuring the Hunter family and their servants.

An insightful look at the impact of war on everyday lives * Choice *
Cynthia Harrod-Eagles is the author of the hugely popular Morland Dynasty novels, which have captivated and enthralled readers for decades. She is also the author of the contemporary Bill Slider mystery series, as well as her new series, War at Home, which is an epic family drama set against the backdrop of World War I. Cynthia's passions are music, wine, horses, architecture and the English countryside.
GOR009980895
9780751574289
0751574287
Pack Up Your Troubles: War at Home, 1919 by Cynthia Harrod-Eagles
Cynthia Harrod-Eagles
War at Home
Used - Very Good
Hardback
Little, Brown Book Group
2019-08-15
400
N/A
Book picture is for illustrative purposes only, actual binding, cover or edition may vary.
This is a used book - there is no escaping the fact it has been read by someone else and it will show signs of wear and previous use. Overall we expect it to be in very good condition, but if you are not entirely satisfied please get in touch with us
Trustpilot