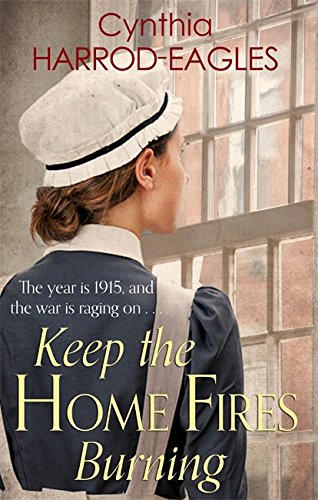 The second book in the War at Home series by the author of The Morland Dynasty novels. Set against the evocative backdrop of World War I, this is an epic family drama featuring the Hunters and their servants

The war was not 'over by Christmas' after all and as 1915 begins, the Hunters begin to settle into wartime life.

Diana, the eldest Hunter daughter, sees her fiance off to the Front but doesn't expect such coldness from her future mother-in-law. David's battalion is almost ready to be sent to the Front, but how will Beattie's fragile peace of mind endure? Below stairs, Ethel, the under housemaid, is tired of having her beaux go off to war so she deliberately sets her sights on a man who works on the railway, believing he won't be allowed to volunteer. Eric turns out to be decent, honest and he genuinely cares about Ethel - is this the man who could give her a new life?

The Hunters, their servants and their neighbours soon realise that war is not just for the soldiers, but it's for everyone to win, and every new atrocity that is reported bolsters British determination: this is a war that must be won at all costs.

Keep the Home Fires Burning is the second book in the War at Home series by Cynthia Harrod-Eagles, author of the much-loved Morland Dynasty novels. Set against the real events of 1915, this is an evocative, authentic and wonderfully depicted drama featuring the Hunter family and their servants.

An insightful look at the impact of war on everyday lives * Choice *
Cynthia Harrod-Eagles is the author of the hugely popular Morland Dynasty novels, which have captivated and enthralled readers for decades. She is also the author of the contemporary Bill Slider mystery series, as well as her recent series, War at Home, which is an epic family drama set against the backdrop of World War I. Cynthia's passions are music, wine, horses, architecture and the English countryside.
GOR007465078
9780751556315
0751556319
Keep the Home Fires Burning: War at Home, 1915 by Cynthia Harrod-Eagles
Cynthia Harrod-Eagles
War at Home
Used - Very Good
Paperback
Little, Brown Book Group
20151203
416
N/A
Book picture is for illustrative purposes only, actual binding, cover or edition may vary.
This is a used book - there is no escaping the fact it has been read by someone else and it will show signs of wear and previous use. Overall we expect it to be in very good condition, but if you are not entirely satisfied please get in touch with us
Trustpilot