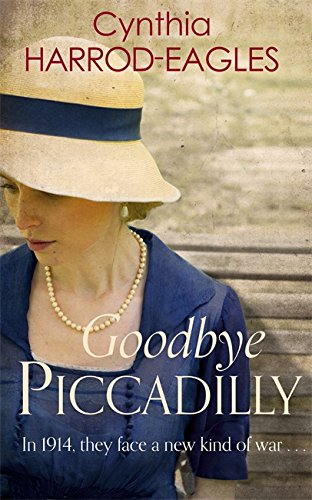 The year is 1914. The village is Northcote. The house is The Elms. The family is the Hunters.

Goodbye, Piccadilly is the start of an epic family drama set against the evocative backdrop of World War I by the author of The Morland Dynasty novels.

In 1914, Britain faces a new kind of war. For Edward and Beatrice Hunter, their children, servants and neighbours, life will never be the same again. Perfect for fans of Downton Abbey and Barbara Taylor-Bradford.

For David, the eldest, war means a chance to do something noble; but enlisting will break his mother's heart. His sister Diana, nineteen and beautiful, longs for marriage. She has her heart set on Charles Wroughton, son of Earl Wroughton, but Charles will never be allowed to marry a banker's daughter. Below stairs, Cook and Ada, the head housemaid, grow more terrified of German invasion with every newspaper atrocity story. Ethel, under housemaid, can't help herself when it comes to men and now soldiers add to the temptation; yet there's more to this flighty girl than meets the eye.

The once-tranquil village of Northcote reels under an influx of khaki volunteers, wounded soldiers and Belgian refugees. The war is becoming more dangerous and everyone must find a way to adapt to this rapidly changing world.

Goodbye Piccadilly is the first book in the War at Home series by Cynthia Harrod-Eagles, author of the much-loved Morland Dynasty novels. Set against the real events of 1914, Goodbye Piccadilly is extraordinary in scope and imagination and is a compelling introduction to the Hunter family.

An insightful look at the impact of war on everyday lives * Choice *
Cynthia Harrod-Eagles is the author of the hugely popular Morland Dynasty novels, which have captivated and enthralled readers for decades. She is also the author of the contemporary Bill Slider mystery series, as well as her new series, War at Home, which is an epic family drama set against the backdrop of World War I. Cynthia's passions are music, wine, horses, architecture and the English countryside.
GOR006211053
9780751556285
0751556289
Goodbye Piccadilly: War at Home, 1914 by Cynthia Harrod-Eagles
Cynthia Harrod-Eagles
War at Home
Used - Very Good
Paperback
Little, Brown Book Group
2014-12-04
400
N/A
Book picture is for illustrative purposes only, actual binding, cover or edition may vary.
This is a used book - there is no escaping the fact it has been read by someone else and it will show signs of wear and previous use. Overall we expect it to be in very good condition, but if you are not entirely satisfied please get in touch with us
Trustpilot