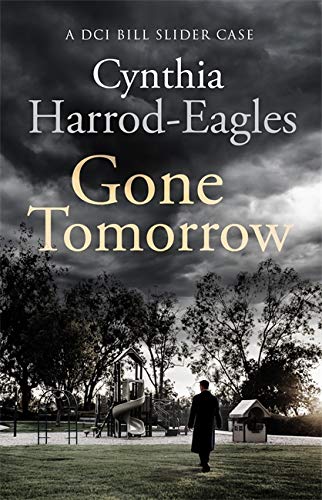 The stabbed body of a well-dressed man is found slumped on a swing in a children's playground in the heart of Detective Inspector Bill Slider's patch.

From the seedy pubs of Shepherd's Bush through the brothels of Notting Hill to the mansions of Holland Park, Slider and his team unearth the victims' sordid lifestyle of debts, drugs and dodgy deals. It soon becomes clear that their prime suspect is a crime baron who will stop at nothing to keep his identity hidden.

However, Slider is not only up against a resourceful villain, but is also fighting to stop the case being taken off his hand. He's so busy he hasn't a spare moment. But when the case is all over, he'll finally have the time to hear what his on-off girlfriend has been trying to tell him...

Praise for the Bill Slider series:

'Slider and his creator are real discoveries'
Daily Mail

'Harrod-Eagles and her detective hero form a class act. The style is fast, funny and furious - the plotting crisply devious'
Irish Times

Harrod-Eagles unleashes an effective, dark-edged tale and serves up a truly nasty villain into the bargain... [She] gracefully builds upon her habitually elegant procedural stylings to deliver taut psychological suspense. * Publishers Weekly *
The books work so well because the author manages to infuse them with a warmth and wit that lingers on after the last page is turned. * Yorkshire Post *
Sharp, witty and well-plotted. * Times *
Good plots and graceful writing count for a lot in the traditional English police procedural, but so do those idiosyncratic touches that keep us coming back to Cynthia Harrod-Eagles's series. Harrod-Eagles has a discerning eye and sympathetic ear for the petty thieves, dope dealers and other bad apples who collectively foul the social barrel but don't deserve killing. * New York Times Book Review *
This is an excellent, solidly professional police story: well-written, with well-drawn characters and a neatly dovetailed plot. * Evening Standard *
Harrod-Eagles is a master of the telling phrase or the catchy put-down. Reading her is a joy. * Irish Times *
Detective Inspector Bill Slider's ninth outing takes him through London's most posh and pathetic neighbourhoods. The antics of this fascinating supporting cast add humour and spice to another winner in a consistently superb series. * Booklist *
There are plenty of suspects for old Bill Slider and his team, and a whole fishmonger's full of red herrings. Harrod-Eagles is a wonderfully assured, compelling plotter, and her hero is as appealing as ever. * Yorkshire Post *
The charm oozed by Bill, who is a normal person with personal problems struggling to survive in a cruel world through humour and wit...a unique novel that gives readers a glimpse of an England rarely seen in this sub-genre. -- HARRIET KLAUSNER
The ebullient Detective Inspector Bill Slider is in good form in Cynthia Harrod-Eagles's new mystery. It's a good puzzle, with well-rounded characters and, fans will be happy to hear, plenty of the usual dreadful puns * Sunday Telegraph *
The author writes complex puzzles that are lightened with pungent wit, setting the scenes and bringing her characters to life with vivid descriptions. * Publishers Weekly *
Each plot twist, including one devious turn that throws suspicion on a former member of Slider's murder squad, hangs on the testimony of complicated characters who are among the author's finest stock. Nobody is exactly what he or she seems: not the victim, not even Slider, who has reason to examine his own * New York Times Book Review *
Confident and lucid * Seattle Times *
Phoebe Agnew, hack journalist and no great fan of the police, is found dead. The army of suspects includes a plethora of police and politicians. Just what was Phoebe researching when she died and why were there no notes left in her pigsty of a flat? The writing is often atmospheric, entertaining us with keen character studies * SHOTS ON THE PAGE *
Harrod-Eagles delivers snappy prose and a ripping tour through the British music world. * Mostly Murder *
BLOOD SINISTER is stuffed with clues into the psychology of characters who think they are being oh-so-clever about guarding their secrets. Even so, the events leadings up to the murder of Phoebe Agnew, a beautiful, wild and untidy left-wing journalist with friends and lovers in London's highest political places, are a true puzzlement right to the end * NEW YORK TIMES BOOK REVIEW *
Her characters are deliciously droll, and she writes with all her customary biting wit and a complexity all too rare in mystery fiction. * KIRKUS REVIEWS *
Cynthia Harrod-Eagles is the author of the hugely popular Morland Dynasty novels, which have captivated and enthralled readers for decades. She is also the author of the contemporary Bill Slider mystery series, as well as her recent series, War at Home, which is an epic family drama set against the backdrop of World War I. Cynthia's passions are music, wine, horses, architecture and the English countryside.
GOR010374620
9780751575408
0751575402
Gone Tomorrow: A Bill Slider Mystery (9) by Cynthia Harrod-Eagles
Cynthia Harrod-Eagles
Bill Slider Mystery
Used - Very Good
Paperback
Little, Brown Book Group
2019-11-07
368
N/A
Book picture is for illustrative purposes only, actual binding, cover or edition may vary.
This is a used book - there is no escaping the fact it has been read by someone else and it will show signs of wear and previous use. Overall we expect it to be in very good condition, but if you are not entirely satisfied please get in touch with us
Trustpilot