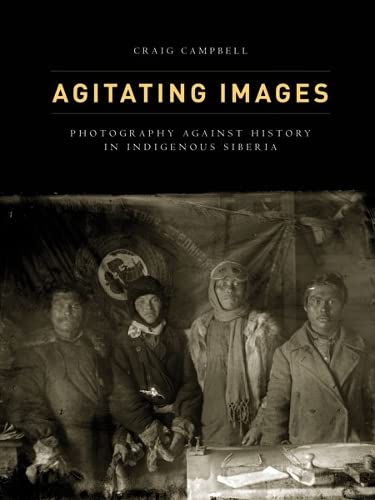 Following the socialist revolution, a colossal shift in everyday realities began in the 1920s and '30s in the former Russian empire. Faced with the Siberian North, a vast territory considered culturally and technologically backward by the revolutionary government, the Soviets confidently undertook the project of reshaping the ordinary lives of the indigenous peoples in order to fold them into the Soviet state. In Agitating Images, Craig Campbell draws a rich and unsettling cultural portrait of the encounter between indigenous Siberians and Russian communists and reveals how photographs from this period complicate our understanding of this history.

Agitating Images provides a glimpse into the first moments of cultural engineering in remote areas of Soviet Siberia. The territories were perceived by outsiders to be on the margins of civilization, replete with shamanic rituals and inhabited by exiles, criminals, and primitive indigenous peoples. The Soviets hoped to permanently transform the mythologized landscape by establishing socialist utopian developments designed to incorporate minority cultures into the communist state. This book delves deep into photographic archives from these Soviet programs, but rather than using the photographs to complement an official history, Campbell presents them as anti-illustrations, or intrusions, that confound simple narratives of Soviet bureaucracy and power. Meant to agitate, these images offer critiques that cannot be explained in text alone and, in turn, put into question the nature of photographs as historical artifacts.

An innovative approach to challenging historical interpretation, Agitating Images demonstrates how photographs go against accepted premises of Soviet Siberia. All photographs, Campbell argues, communicate in unique ways that present new and even contrary possibilities to the text they illustrate. Ultimately, Agitating Images dissects our very understanding of the production of historical knowledge.

The archival turn has had a sobering effect on recent attempts to grapple with the histories of photography but for the best studies--like Craig Campbell's--the archive itself is part of the historical problem: its internal mechanisms, its effects of power, its production of truth and its techniques of forgetting and erasure--all effects that, as Campbell shows in this highly original work of excavation and disruption, can never be entirely secured against the arbitrariness and disfunction of the archival machine and the troubling liability of archival photographs to slip and slide out of place. -John Tagg, Binghamton University

Campbell's project is an unabashedly original contribution to the intersecting fields of anthropology, media theory, and Russian/Soviet history, providing us with a stimulating and deep reevaluation of each field as well as the very status of the image itself.-Slavic and East European Journal

Craig Campbell is assistant professor of anthropology at the University of Texas, Austin.

Prologue
Introduction: In the Archives of the Cultural Base

Conclusion: Ethics of Presence and the (De)generative Image

NPB9780816681068
9780816681068
0816681066
Agitating Images: Photography against History in Indigenous Siberia by Craig Campbell
Craig Campbell
First Peoples: New Directions in Indigenous Studies
New
Paperback
University of Minnesota Press
20140901
272
N/A
Book picture is for illustrative purposes only, actual binding, cover or edition may vary.
This is a new book - be the first to read this copy. With untouched pages and a perfect binding, your brand new copy is ready to be opened for the first time
Trustpilot