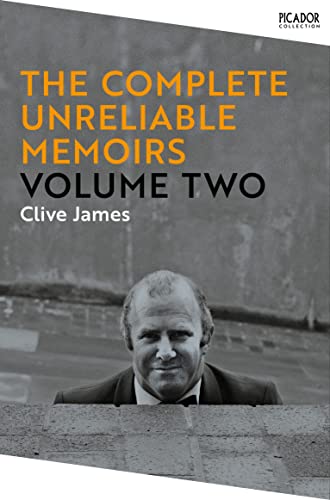 The final two volumes of the critically-acclaimed, miillion copy best-selling memoir series from the inimitable Clive James - a hilarious and poignant account of a truly extraordinary life

Collected here for the first time are the final two volumes of Clive James's million-copy selling autobiographical 'Unreliable Memoirs' series: North Face of Soho and The Blaze of Obscurity. Newly married and graduated from the cloistered world of Cambridge academia, these volumes see Clive attempt to make his mark on Literary London, writing poems, plays, and criticism, brushing shoulders with the rich and famous, and fitfully attempting to secure a regular income.

True stardom, however, soon awaits on television, as the launch of Clive James on TV results in Clive becoming one of the most recognizable faces on British television in the 80s and 90s. We follow him as he interviews Hefner and Hepburn, sends 'Postcards' from Kenya, Shanghai, and Dallas, and - of course - delights in Margarita Pracatan's unique cover versions of pop hits. Taking you behind the scenes of his years on television, and charting the course of his remarkable career, this is memoir-writing at its sharpest and most entertaining, and a fitting conclusion to a classic series.

The Complete Unreliable Memoirs: Volume Two is the culmination to one the most beloved and acclaimed series of memoirs of all time, from a true national treasure.

Other Clive James books available as part of the Picador Collection include The Complete Unreliable Memoirs: Volume One and Cultural Amnesia.

A larger-than-life story packed with insight and hard-earned self-knowledge. Many autobiographies should never have been written. Clive has written four so far and I, for one, hope there are more to come. -- Melton Times, on North Face of Soho
Clive James is an intellectual as well as a joker, a wise man as well as a wit. * Observer *
Nobody writes like Clive James; he has invented a style. * Spectator *
Clive James was the author of more than forty books. As well as essays, he published collections of literary and television criticism, travel writing, verse and novels, plus five volumes of autobiography, Unreliable Memoirs, Falling Towards England, May Week Was In June, North Face of Soho and The Blaze of Obscurity. As a television performer he appeared regularly for both the BBC and ITV, most notably as writer and presenter of the Postcard series of travel documentaries. He published several poetry collections, including the Sunday Times bestseller Sentenced to Life, and a translation of Dante's The Divine Comedy, which was also a Sunday Times bestseller. In 1992 he was made a Member of the Order of Australia and in 2003 he was awarded the Philip Hodgins memorial medal for literature. He held honorary doctorates from Sydney University and the University of East Anglia. In 2012 he was appointed CBE and in 2013, an Officer of the Order of Australia. He died in 2019.
GOR012760811
9781529090772
1529090776
The Complete Unreliable Memoirs: Volume Two by Clive James
Clive James
Picador Collection
Used - Very Good
Hardback
Pan Macmillan
2022-04-28
608
N/A
Book picture is for illustrative purposes only, actual binding, cover or edition may vary.
This is a used book - there is no escaping the fact it has been read by someone else and it will show signs of wear and previous use. Overall we expect it to be in very good condition, but if you are not entirely satisfied please get in touch with us
Trustpilot