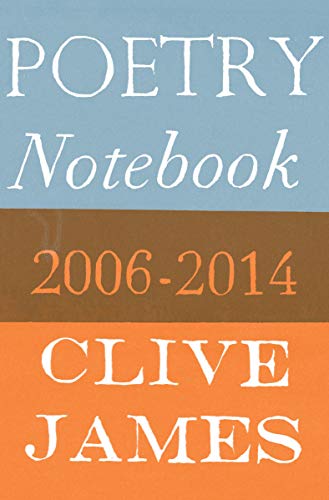 Renowned critic and bestselling writer Clive James sets down his thoughts on the art form which matters to him most: poetry

Clive James is one of our finest critics and best-loved cultural voices. He is also a prize-winning poet. Since he was first enthralled by the mysterious power of poetry, he has been a dedicated student. In fact, for Clive, poetry has been nothing less than the occupation of a lifetime, and in this book he presents a distillation of all he's learned about the art form that matters to him most.

With his customary wit, delightfully lucid prose style and wide-ranging knowledge, Clive explains the difference between the innocuous stuff that often passes for poetry today and a real poem: the latter being a work of unity that insists on being heard entire and threatens never to leave the memory. A committed formalist and an astute commentator, Clive offers close and careful readings of individual poems and poets (from Shakespeare to Larkin, Keats to Pound), and in some case second readings or re-readings late in life - just to be sure he wasn't wrong the first time! Whether discussing technical details of metaphorical creativity or simply praising his five favourite collections of all time, he is never less than captivating.

Filled with insight and written with an honest, infectious enthusiasm, Poetry Notebook is the product of over fifty years of writing, reading, translating and thinking about poetry.

The material was well worth collecting . . . entertaining . . . His hand has not lost its cunning * Financial Times *
He is a unique figure, a straddler of genres and a bridger of the gaps between high and low culture. He will be seen, I think, as one of the most important and influential writers of our time -- Bryan Appleyard * Sunday Times Culture *
The James voice is immediately recognisable. To describe it as comic does not do it justice: it might be fairer to say that the world it inhabits is prone, at most times, to a comedy of desperate sorts . . . James's best comedy is in the phrase-making, a craft at which he excels . . . James was - and remains - far more than a clever boy laughing at muddied oafs. He is a scholar who has preferred wearing his scholarship lightly . . . Full of an energy that is partly Augustan but racier, as if Dr Johnson had sealed a pact with the 19th-century poet Winthrop Mackworth Praed . . . Witty but fully sounded through, grave but not solemn -- George Szirtes * New Statesman *
As a critic, James is formidable, blending vast reading with the knowledge of practice. He demurs from having an "aesthetic system", but this is too modest. There are some clear positions in Poetry Notebook, and they are erudite, strident, but balanced . . . Poetry Notebook is a stellar collection by a great Australian writer, a man who, "[l]ooking back ... with tired eyes", retains the poetic enthusiasm of his teenage self -- James McNamara * The Australian *
We should be grateful still to benefit from [Clive James'] encyclopaedic knowledge of and love for poetry and his almost faultless ability to, as he so suggestively puts it, 'listen to the flavour' of verse -- James Marriott * Literateur *
Clive James's Poetry Notebook reintroduced me to the intense pleasures of close reading. Although he has some hard - and funny - things to say about Ezra Pound, James is firmly committed to celebration. He reminds us that poetry is, or can be, "the most exciting thing in the world". And this is what literary criticism, and literary pedagogy, should aim for: not to add a further encrustation of complexity, but simply to instil the readerly habits of gratitude and awe -- Martin Amis, Books of the Year 2014 * Financial Times *
James's miniature essays . . . showcase his passion for verse - for the questions it raises and the answers it can provide. Deeply personal and formally incisive -- Books of the Year 2014 * Financial Times *
The Clive James voice: intensely serious yet self-mocking, grave but never solemn, highbrow but never snobby. And always gorgeously inventive -- Books of the Year 2014 * Arts and Letters Daily *
I read Clive James's Poetry Notebook standing by my poetry wall to save getting up and down, and my wall turned out to be just railings -- Tom Stoppard, Books of the Year 2014 * Times Literary Supplement *
Most of the essays - as well as the supplementary material printed at the end of this book - are distinguished by sensitivity, good sense and discrimination, products of a lifetime's devotion to poems and poetry -- Andrew Riemer * Sydney Morning Herald *
Poetry Notebook should remain in the present tense for a long time as a precious gift for anyone who wants to write better poems or read poems better -- Dan Hitchens * Standpoint *
James has, ever since his first, rip-roaring reviews for the TLS, possessed genius for unpacking poetic process - for admiring the poem on its own technical terms . . . Poetry Notebook convinces the reader once again that a great critic can reawaken a dormant sense of wonder for what poetry can do. -- Geordie Williamson * Australian Review of Books *
Often the measure of a good book to me is whether it sparks an interest and sends me off in search of more information. Clive James has done this with his Poetry Notebook, pointing me towards poets I have not yet explored and sending me back to look anew at some I have grappled with in the past -- Elspeth McLean * Otago Daily Times *
He writes with the buoyant, aphoristic panache that made his career and with a judgment refined by a lifetime of reading and thinking about poetry - and writing it . . . sympathetic, absorbing and provocative . . . His spreading of the word is a delight. You need a second poetry notebook, as you read, in which to write down the names of unfamiliar poets and poems. This is, in its way, his literary will and testament - he makes no secret of the leukaemia that afflicts him. And he has such a discerning ear and eye that what I long for now is an inventory of every poem that has mattered to him . . . marvellously entertaining -- Kate Kellaway * Observer *
A breathtaking book by an old master -- Jason Guriel * New Statesman *
Informs and delights * Publishers Weekly *
[James] has always written with the verve, concision and sheer relish of the born poet, whatever his theme * TLS *
The book, although necessarily heterogeneous, stands as a whole as a manifesto to an essential faith in the force and beauty of language, especially language wrought to a high intensity by the shaping power of the poet. . .Few contemporary critics display the passionate commitment to the idea of poetry, and to the idea of poetry's centrality to civilized life, that James does -- John Banville * New York Review of Books *

Clive James is the author of more than forty books. As well as verse and novels, he has published collections of essays, literary criticism, television criticism and travel writing, plus five volumes of autobiography. In 1992 he was made a Member of the Order of Australia, and in 2003 he was awarded the Philip Hodgins memorial medal for literature.

His work includes Cultural Amnesia, Sentenced to Life and his own translation of Dante's The Divine Comedy.

GOR006390235
9781447269106
1447269101
Poetry Notebook: 2006-2014 by Clive James
Clive James
Used - Very Good
Hardback
Pan Macmillan
2014-10-01
192
N/A
Book picture is for illustrative purposes only, actual binding, cover or edition may vary.
This is a used book - there is no escaping the fact it has been read by someone else and it will show signs of wear and previous use. Overall we expect it to be in very good condition, but if you are not entirely satisfied please get in touch with us
Trustpilot