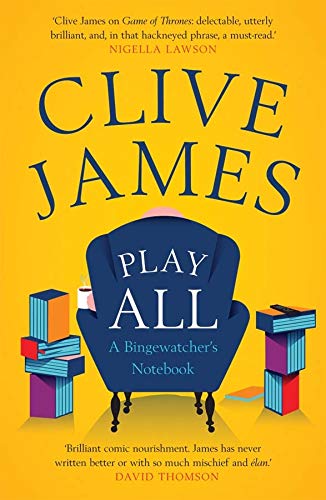 Play All by Clive James

Play All: A Bingewatcher's Notebook by Clive James

Television and TV viewing are not what they once were-and that's a good thing, according to award-winning author and critic Clive James. Since serving as television columnist for the London Observer from 1972 to 1982, James has witnessed a radical change in content, format, and programming, and in the very manner in which TV is watched. Here he examines this unique cultural revolution, providing a brilliant, eminently entertaining analysis of many of the medium's most notable twenty-first-century accomplishments and their not always subtle impact on modern society-including such acclaimed serial dramas as Breaking Bad, The West Wing, Mad Men, and The Sopranos, as well as the comedy 30 Rock. With intelligence and wit, James explores a television landscape expanded by cable and broadband and profoundly altered by the advent of Netflix, Amazon, and other cord-cutting platforms that have helped to usher in a golden age of unabashed binge-watching.
James loves television, he loves the winding stories it tells and that we share them together. Play All is a late love letter to the medium of our lives.-AA Gill, Sunday Times

His style, smart as paint and full of esoteric references, but entranced by the stupid and the stupidly enjoyable, has been widely copied but never surpassed. . . . He shares with these serial dramas a fiercely intelligent populism, a willingness to play to the crowd while trusting they will be able to keep up without too much plot-summary or handholding.-Joe Moran, The Guardian

A loving and breezy set of essays about the shows [James] admires and the flowering of TV more generally. . . . James is an incisive and hilarious critic with a relaxed, learned voice. . . . Play All is full of riotous turns of phrase, keen observations, and sick burns.-Willa Paskin, Slate

James brings a fundamentally serious eye to his chosen medium, littering the prose with grand literary references, eager to engage with television as a worthy, even important, part of culture. . . . He does so with wit and knowing levity, conscious that television is neither fiction nor film, and that it carries its own evaluative criteria.-Andrew Irwin, Times Literary Supplement

Play All is a small book but by no means a slight one. Large-brained and largehearted, and written with astonishing energy, it carries its study of the box-set dramas . . . into revelatory depths while reserving the right to be, wherever possible, superficial, waggish, ludicrous, Clive James-ian. It is also quite obviously and plangently full of love: love of life, love of story, love of art, love of daughters. Against a darkening background the TV screen flickers brighter, and James's mind casts its illuminations with still greater vividness.-James Parker, New York Times Book Review

If the [Nobel Prize in Literature] were ever to go to a critic, I'd give it to Clive James. He has so much erudition and high-stepping passion. He writes excellent poems and even better memoirs. He has delivered very good books of translation. He is a polymath. He is also very funny.-Dwight Garner, New York Times

Clive James was the best television critic of his generation, and in this absorbing look at the US TV dramas that have flooded our screens in recent years, he shows that he has lost none of his flair.
-Simon Shaw, Mail on Sunday

Everyone who has written television criticism since the 1970s, including this reviewer, has done so in the long shadow of Clive James. . . . On every page and sometimes every paragraph there's a sentence at which you have little choice but to stop, think and, inevitably, admire.-Andrew Anthony, The Observer

This snug body of writings will enrich your appreciation of TV drama's big hitters and help elevate discussion of them . . . Often as entertaining and compulsorily viewed as the very shows themselves.-Hilary A. White, Belfast Telegraph

On almost every page of Play All there is an example of splendid, wilful contentiousness and tart observations that hit the bulls-eye.-Alan Taylor, Glasgow Herald

We need a definite reassessment of the so-called Golden Age of Television, and who better to do it than Clive James. . . . There's no doubt that James has still got it. Even when you don't agree with him you will be pleasantly provoked.-James Medd, New Statesman

Book critics often write about the importance of a distinctive authorial voice but there can't be many writers whose voice is as clear and as dear to its readers as Clive James. . . . Few so successfully combine the erudition of the academic with the giddiness of the true fan, capable of analysing The Wire via Camus and Nietzsche without sounding like a pretentious/delusional fool. Instead James sounds thoughtful, confident and generous.-Big Issue

A work that is a joy to read for anyone with any interest in television. . . . Whatever James is writing about his prose is full of wit, fire and lightly worn learning. Play All has, for obvious reasons, a valedictory tone, but if this is James's farewell to writing about television, it is an abundantly grateful and happy one.-Nigel Andrew, Literary Review

Play All is brilliant, comic nourishment. James has never written better or with so much mischief and elan. His observations-withering and celebratory-are bracingly intelligent and written in so accessible and winning a voice.-David Thomson

Clive James was the best television critic of his generation, and in this absorbing look at the US TV dramas that have flooded our screens in recent years, he shows that he has lost none of his flair.
-Simon Shaw, Mail on Sunday

-- Simon Shaw * Mail on Sunday *
Clive James is an Australian memoirist, poet, translator, critic, and broadcaster who has written more than thirty books of fiction, nonfiction, and poetry. He lives in Cambridge, UK.
GOR008853556
9780300229707
0300229704
Play All: A Bingewatcher's Notebook by Clive James
Clive James
Used - Very Good
Paperback
Yale University Press
20170606
216
N/A
Book picture is for illustrative purposes only, actual binding, cover or edition may vary.
This is a used book - there is no escaping the fact it has been read by someone else and it will show signs of wear and previous use. Overall we expect it to be in very good condition, but if you are not entirely satisfied please get in touch with us
Trustpilot