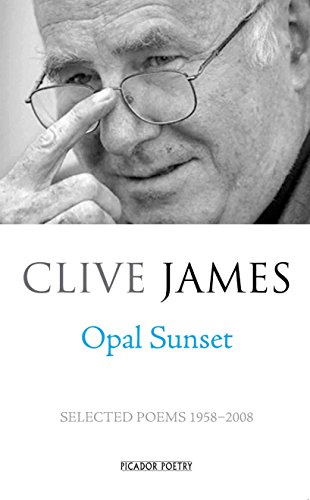 A selection of poems from one of Britain's best-loved writers.

Opal Sunset gathers together fifty years of Clive James's poetry, and will undoubtedly enhance his reputation as one of the most versatile and accomplished of contemporary writers. Indeed - as with Other Passports, The Book of My Enemy and Angels Over Elsinore before it - Opal Sunset proves Clive James to be as well suited to the intense demands of the poetic form as he is to prose.

Readers new to his verse will not be surprised to find him a master of the comic set-piece and surreal excursion, while those who are familiar with his previous collections will already be aware of his fluency and apparently effortless style, his technical skill and thematic scope. Ultimately, however, the highest recommendation one can give is that Clive James is, in these poems, unmistakably himself - an assured and dazzling wordsmith.

`James is an absolute master of surface, and the great critic of surfaces, not because he is superficial but because he believes that the distortions on the surface tell you what's underneath. His simplicity isn't simple and his clarity has depth. With the essays and the poems - which I think you have to consider as one great project - he's built an immense, protective barrier reef around western civilisation' Julian Gough, Prospect

`At the writing desk, many poets are on their best behavior, but not Clive James, who allows his inner Byron to emerge - satiric, scathing at times, and keenly attuned to the frivolities of the day. Opal Sunset is a generous helping of his very best, guaranteed to lift the spirit and raise the eyebrow' Billy Collins

Wise and witty. -- Adam Gopnik
Clive James is the author of more than forty books. As well as essays, he has published collections of literary and television criticism, travel writing, verse and novels, plus five volumes of autobiography, Unreliable Memoirs, Falling Towards England, May Week Was In June, North Face of Soho and The Blaze of Obscurity. As a television performer he appeared regularly for both the BBC and ITV, most notably as writer and presenter of the Postcard series of travel documentaries. His popular Radio 4 series A Point of View has been published in volume form. He has also published several poetry collections, a verse commentary of Proust, Gate of Lilacs, and a translation of Dante's The Divine Comedy. In 1992 he was made a Member of the Order of Australia and in 2003 he was awarded the Philip Hodgins memorial medal for literature. He holds honorary doctorates from Sydney University and the University of East Anglia. In 2012 he was appointed CBE and in 2013 an Officer of the Order of Australia.
GOR001816969
9780330468176
0330468170
Opal Sunset: Selected Poems, 1958-2008 by Clive James
Clive James
Used - Very Good
Hardback
Pan Macmillan
2009-08-07
208
N/A
Book picture is for illustrative purposes only, actual binding, cover or edition may vary.
This is a used book - there is no escaping the fact it has been read by someone else and it will show signs of wear and previous use. Overall we expect it to be in very good condition, but if you are not entirely satisfied please get in touch with us
Trustpilot