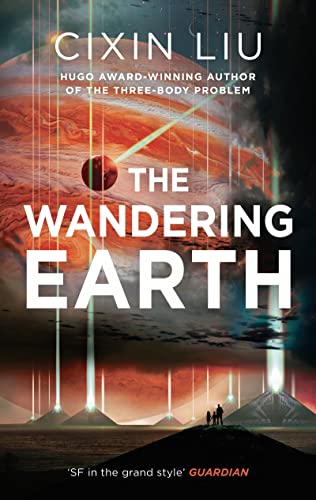 The Wandering Earth by Cixin Liu

Short stories, including five Chinese Galaxy Award-winners, take you from Earth to the edge of the Universe and back again.

The Wandering Earth by Cixin Liu

The Sun is dying. Earth will perish too, consumed by the star in its final death throes. But rather than abandon their planet, humanity builds 12,000 mountainous fusion engines to propel the Earth out of orbit and onto a centuries-long voyage to Proxima Centaurai...

Cixin Liu is one of the most important voices in world Science Fiction. A bestseller in China, his novel, The Three-Body Problem, was the first translated work of SF ever to win the Hugo Award.

Here is the first collection of his short fiction: ten stories, including five Chinese Galaxy Award-winners. This collection's title story, The Wandering Earth, is the biggest SF movie ever to come out of China - taking the world's #1 box office ranking in February 2019.

Liu's writing takes the reader to the edge of the universe and the end of time, to meet stranger fates than we could have ever imagined. With a melancholic and keen understanding of human nature, Liu's stories show humanity's attempts to reason, navigate and, above all, survive in a desolate cosmos.

'Cixin's trilogy is SF in the grand style, a galaxy-spanning, ideas-rich narrative of invasion and war' GUARDIAN.

'Wildly imaginative, really interesting ... The scope of it was immense' BARACK OBAMA, 44th President of the United States.

'Complex and grandiose ... this is a mind-altering and immersive experience' Daily Mail.
'A marvellous melange of awe-inspiring scientific concepts ... exhilarating, mind-stretching' TLS.
'Top-flight SF; smart, informative and engaging' SFX.
'Liu conjures up a genuine sense of wonder' SFX.
'Absolutely fantastic ... The hardback is a thing of beauty and its translations are wonderful' For Winter Nights.
'A wonderful collection and brings Cixin Liu's own unique flavour to the genre' SF Crows Nest.
'Liu uses the exotic foreignness of alien environments to lure readers into an enchanted literary escape pod. The story's backdrop might be one of spectacular beauty or entropic devastation but the distancing effect its abnormality provides is always stirring' Big Issue.
'Short stories [...] allow an idea to be developed without getting bogged down with having to fill hundreds of pages and in this collection Cixin Liu has ably demonstrated the form ... One of the most interesting books I have read' Concatenation.
'Liu has continued to write and publish stories which share similar ideas and offer a vision for a better world through scientific fantasy' New European.
'As with other Chinese works in the genre, it is tempting to draw parallels with the Communist regime, even when the writers themselves do not - and dare not - make those analogies explicit. For Western readers, Chinese sci-fi thus offers a window into the country's hopes and fears. Especially its fears' Economist.

Cixin Liu is China's #1 SF writer and author of The Three-Body Problem - the first ever translated novel to win a Hugo Award. Prior to becoming a writer, Liu worked as an engineer in a power plant in Yangquan.

GOR008789810
9781784978518
1784978515
The Wandering Earth by Cixin Liu
Cixin Liu
Used - Very Good
Paperback
Head of Zeus
2017-10-05
464
N/A
Book picture is for illustrative purposes only, actual binding, cover or edition may vary.
This is a used book - there is no escaping the fact it has been read by someone else and it will show signs of wear and previous use. Overall we expect it to be in very good condition, but if you are not entirely satisfied please get in touch with us
Trustpilot