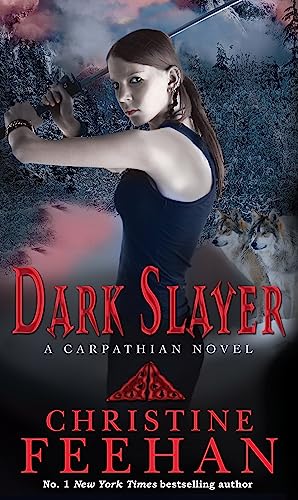 A rumour has persisted in the vampire world of a dark slayer - mysterious, elusive and seemingly impossible to kill, she is the one hunter who strikes terror into the hearts of the undead. She is Ivory Malinov. Her only brethren the wolves. Long ago betrayed by her people, abandoned by her family, Ivory has lived centuries without companionship or love. She has sustained her sanity by preparing for one purpose - to destroy her greatest enemy. Until the night she picks up the scent of a man, her unexpected salvation. Her lifemate. The curse of all Carpathian women.

He is Razvan. Branded a criminal, detested and feared, he is a dragonseeker borne of one of the greatest Carpathian lineages, only to be raised as its most despised - and captive - enemy. Fleeing from his lifetime of imprisonment, Razvan now seeks the dawn to end his terrible existence. Instead he has found his deliverance in the Dark Slayer. In spirit, in flesh and blood, in love, and in war, Ivory and Razvan are made for each other. For as long as they dare to live.

NEW YORK TIMES bestselling author Christine Feehan has received numerous honours including being a nominee for the Romance Writers of America RITA and receiving a Career Achievement Award from ROMANTIC TIMES. Visit her at www.christinefeehan.com
GOR002308119
9780749941697
0749941693
Dark Slayer: Number 20 in series by Christine Feehan
Christine Feehan
'Dark' Carpathian
Used - Very Good
Paperback
Little, Brown Book Group
2010-09-01
528
N/A
Book picture is for illustrative purposes only, actual binding, cover or edition may vary.
This is a used book - there is no escaping the fact it has been read by someone else and it will show signs of wear and previous use. Overall we expect it to be in very good condition, but if you are not entirely satisfied please get in touch with us
Trustpilot