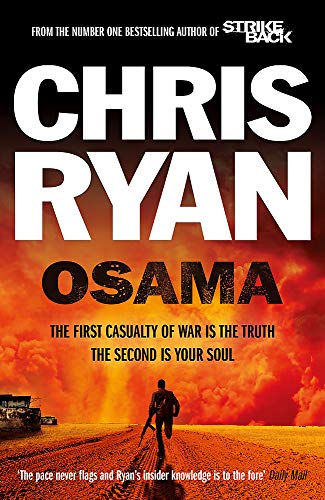 Osama: The first casualty of war is the truth, the second is your soul by Chris Ryan

From the author of the bestselling Danny Black series and the hit TV show Strikeback.

Despatches from the secret world behind the headlines. Former SAS legend Chris Ryan brings you his seventeenth novel, filled with his trademark action, thrills and inside knowledge. Osama Bin Laden is dead.
The President of the United States knows it. The world knows it. And SAS hero Joe Mansfield knows it. He was on the ground in Pakistan when it happened. He saw Seal Team 6 go in, and he saw them extract with their grisly cargo. He was in the right place at the right time.

Because now, somebody wants Joe dead, and they're willing to do anything to make it happen. His world is violently dismantled. His family is targeted, his reputation destroyed. And as a mysterious and ruthless enemy plans a devastating terror attack on both sides of the Atlantic, Joe knows this: his only chance of survival is to find out what happened in Bin Laden's compound the night the Americans went in.

But an unseen, menacing power has footprints it needs to cover. And it will stop at nothing to prevent him uncovering the sinister truth...

This Newcastle-born former SAS sergeant is firmly established as one of our most popular action authors. * Daily Mail *
This Newcastle-born former SAS sergeant is firmly established as one of our most popular action authors. * Daily Mail *
Chris Ryan is as hard as nails. * Mirror *
Former SAS corporal and the only man to escape death or capture during the Bravo Two Zero operation in the 1991 Gulf War, Chris Ryan turned to writing thrillers to tell the stories the Official Secrets Act stops him putting in his non-fiction. His novels have gone on to inspire the Sky One series Strike Back. Born near Newcastle in 1961, Chris Ryan joined the SAS in 1984. During his ten years there he was involved in overt and covert operations and was also sniper team commander of the anti-terrorist team. During the Gulf War, Chris Ryan was the only member of an eight-man unit to escape from Iraq, where three colleagues were killed and four captured. It was the longest escape and evasion in the history of the SAS. For this he was awarded the Military Medal. He wrote about his experiences in the bestseller The One That Got Away, which was adapted for screen, and since then has written three other works of non-fiction, over twenty bestselling novels and a series of childrens' books.
GOR004626830
9781444706468
1444706462
Osama: The first casualty of war is the truth, the second is your soul by Chris Ryan
Chris Ryan
Used - Very Good
Paperback
Hodder & Stoughton General Division
2013-03-26
400
N/A
Book picture is for illustrative purposes only, actual binding, cover or edition may vary.
This is a used book - there is no escaping the fact it has been read by someone else and it will show signs of wear and previous use. Overall we expect it to be in very good condition, but if you are not entirely satisfied please get in touch with us
Trustpilot