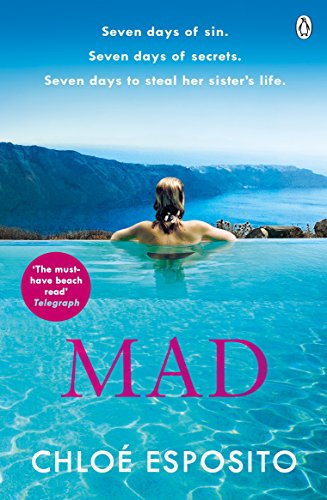 Beth has always been the golden girl, leaving her identical twin, Alvie, in her shadow. She has everything Alvie ever wanted - the money, the hot husband, the cute baby, the fast car.

So when she invites Alvie for seven sun-drenched days at her luxury villa in Sicily, Alvie accepts. Just because Alvie can't stand Beth doesn't mean she can't enjoy a slice of her decadent lifestyle.

But her usually goody-two-shoes twin has a hidden agenda. And when the sisters swap identities for a day, it ends badly for Beth. Very badly.

It's Alvie's chance to steal the life that she deserves . . .

If she can get away with it.

Can't get enough of Alvie? Why not read her next book, Bad?

Sizzlingly glamorous * Guardian *
This summer's raciest read . . . The must-have beach read for millennials this summer * Telegraph *
A summer read to make you hotter than the weather outside . . . you'd be mad not to find room for this in your case * Sun *
A fast-paced tale of sex, lies and murder . . . Sex and the City dialled up several notches * Stylist *
The white-hot debut * Glamour *
Gone Girl plus . . . Esposito has added a dollop of Bridget Jones to the mix * Telegraph *
So begins this caper that has Alvina up to her neck in designer labels, hot sex and trouble . . . outrageous - it kept me reading * Daily Mail *
I just read Mad in one go. I bloody LOVED it. Like Gone Girl, if Amy Schumer had written it. SUCH fun -- Bryony Gordon * bestselling author of Mad Girl *
One of the most compelling and hilarious characters we've come across in a long time. Warning: this brilliant and dark book is not for the faint-hearted * New Magazine *
Like The Devil Wears Prada - fast-paced, but funnier and more readable * Independent, 10 Best Debut Novels by Women Authors *
She's an evil hot mess is what she is, and I kinda like it! -- Sarah Knight * bestselling author of The Life-Changing Magic of Not Giving a F**k *
Allergic to chick lit? Meet Alvie Knightly . . . Insane as its title promises * Mail on Sunday *
Raunchy, fun * Guardian *
Trust us when we say that you won't ever have encountered a character quite like Alvie Knightly - the often-drunk, sex-mad, always-sassy heroine . . . A brilliantly bonkers read * Heat *
If you loved [Paula Hawkins'] Into the Water, try Mad * Red *
Pure, unadulterated entertainment. There is nothing Chloe Esposito's Alvie won't do. Strap in for a fun, fast and fresh read -- Ali Land * author of Sunday Times bestseller Good Me Bad Me *
Chloe Esposito introduces a compelling and uncensored antiheroine * US Weekly *
Using Sicily as a backdrop with its gorgeous architecture, villas and sexy men, Esposito pens an unforgettable summer debut headed by a no-holds-barred protagonist * Library Journal *
Mad is deliciously over-the-top, with a protagonist you'll never forget and an ending that promises more chaos to come * Bookpage *
Chloe [has] a fantastic natural vibrancy and humour in her work -- Richard Skinner, Director of Fiction at the Faber Academy
What readers are saying about Mad * - *
100% MAD about this book * NetGalley Reviewer *
A page-turner, compelling and delightfully crazy. I can't wait for books two and three * NetGalley Reviewer *
Chloe Esposito has broken the mould. The unconventional heroine and plot breaks so many conventions leading to an enjoyable, fast-paced read, which manages to be well-written and funny. It is perfect for the beach or a long journey * NetGalley Reviewer *
Absolutely loved this book, a real page turner and I didn't want to come to the end * NetGalley Reviewer *
Whoa! Yeah I started my review like that . . . but that's what this book is whoooaaa! it truly is M.A.D. . . . Mental Addictive * NetGalley Reviewer *
Insane for all the right reasons - once you meet Alvie Knightly you won't want to turn your back on her, no way! * NetGalley Reviewer *
This novel cracks along with frenetic, addictive style, beautifully descriptive in hot and heavy fashion . . . highly recommended * NetGalley Reviewer *
Mad is certainly mad! I was hooked on our hero, Alvie * NetGalley Reviewer *
Chloe Esposito is from Cheltenham and now lives in London. She has a BA and MA in English from Oxford University, where her dissertation focused on 19th-century feminist writers. She has been a senior management consultant, an English teacher at two of the UK's top private schools and a fashion stylist at Conde Nast. She is a graduate of the Faber Academy and is now writing full-time.
GOR009160754
9781405928793
1405928794
Mad: 2018's Hottest Beach Read by Chloe Esposito
Chloe Esposito
Mad, Bad and Dangerous to Know Trilogy
Used - Very Good
Paperback
Penguin Books Ltd
2018-05-31
400
N/A
Book picture is for illustrative purposes only, actual binding, cover or edition may vary.
This is a used book - there is no escaping the fact it has been read by someone else and it will show signs of wear and previous use. Overall we expect it to be in very good condition, but if you are not entirely satisfied please get in touch with us
Trustpilot