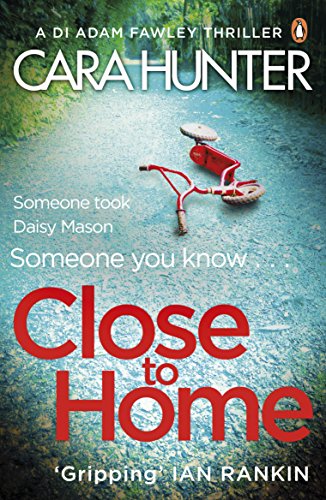 Close to Home by Cara Hunter

SOMEONE TOOK DAISY MASON . . . SOMEONE YOU KNOW.

The Richard and Judy Book Club Pick that became the most talked-about crime debut of the year, this pulse-pounding thriller about the search for a missing child will keep you turning the pages all night.

'THE LAST TWIST WAS A GENUINE STROKE OF GENIUS' John Marrs

HOW CAN A CHILD GO MISSING WITHOUT A TRACE?

Last night, eight-year-old Daisy Mason disappeared from a family party. No one in the quiet suburban street saw anything - or at least that's what they're saying.

DI Adam Fawley is trying to keep an open mind. But he knows the nine times out of ten, it's someone the victim knew.

WHAT AUTHORS AND READERS ARE SAYING:

'Cancel everything. You're not going anywhere until you finish' EMILY KOCH

'A classy, agile, fresh, unpredictable and utterly compelling gift of a book: hats off!' NICCI FRENCH

'Cara Hunter is the new queen of the cliffhanger: fans of Close To Home are not going to be disappointed' JOHN MARRS

'A real gripper of a read' PETER JAMES

'Cara Hunter is a brilliant plotter, but it's her masterfully drawn characters that really make her novels stand out' RACHEL ABBOTT

'I FINISHED CLOSE TO HOME IN ONE SITTING!' Nuala Ellwood, author of My Sister's Bones

'CLOSE TO HOME HAD ME SO GRIPPED I COULDN'T PUT THIS CHILLING BOOK DOWN. CARA HUNTER IS A MASTERFUL STORYTELLER' Sarah Ward

'I ABSOLUTELY LOVED HOW [CLOSE TO HOME] WAS WRITTEN - REMINDING ME OF THE TV PROGRAMME BROADCHURCH. A FAST-PACED, TWISTY-TURNY DEBUT THAT HAD ME DYING TO KNOW WHODUNNIT' Mel Sheratt

THE HOTTEST NEW CRIME SERIES OF 2018

From a ferocious new talent, this pulse-pounding race against time to find a missing girl will be loved by fans of Susie Steiner, Tana French and Ruth Rendell.

-- From the publishers
A mazey, gripping read -- Ian Rankin
Cara Hunter has written like a pro, with admirable command of pace and rising tension * The Times *
Close to Home is an utterly immersive story that pulls you into the heart of a search for a missing child. Compulsive, with an ending you will not see coming -- Emma Kavanagh
One of the best crime thrillers I have ever read! -- Kathryn Croft
Hunter has a keen sense of contemporary mores...The most compelling thing about the novel is its portrait of a self-absorbed mother whose inability to love her children leads to a breathtaking denouement. * Sunday Times *
Close To Home hit the ground running and didn't stop right until the final page...the last twist was a genuine stroke of genius... sets the bar for new crime writers -- John Marrs, author of The One
'In this gripping mystery, Hunter keeps her readers guessing about Daisy's fate until the last page.' * Daily Express *
I finished Close to Home in one sitting! Such a cleverly written, chilling and twisty read -- Nuala Ellwood
A thrilling opener to a hugely promising new series, with a cop who sidesteps all of those weary 'maverick' tropes while staying kind, compassionate, clever and just that bit out of the ordinary -- Alison Graham * Radio Times *
Cara Hunter's writing....lifts this from a run-of-the-mill crime thriller to a gripping page-turner. The result is an immersive experience, with many twists and turns. Compulsivereading * Scotsman *
'a gripping page turner' * i *
Close to Home had me so gripped I couldn't put this chilling book down. Cara Hunter is a masterful storyteller -- Sarah Ward, author of 'In Bitter Chill'
I absolute loved how [Close to Home] was written - reminding me of the TV programme Broadchurch. A fast-paced, twisty-turny debut that had me dying to know whodunnit -- Mel Sheratt
Cara Hunter is the author of the Sunday Times bestselling crime novels Close to Home, In the Dark and No Way Out, all featuring DI Adam Fawley and his Oxford-based police team. Close to Home was a Richard and Judy Book Club pick, was shortlisted for Crime Book of the Year in the British Book Awards 2019 and No Way Out was selected by the Sunday Times as one of the 100 best crime novels since 1945. Cara's novels have sold more than three quarters of a million copies worldwide. Cara Hunter lives in Oxford, on a street not unlike those featured in her books.
GOR008764886
9780241283097
0241283094
Close to Home: The 'impossible to put down' Richard & Judy Book Club thriller pick 2018 by Cara Hunter
Cara Hunter
DI Fawley
Used - Very Good
Paperback
Penguin Books Ltd
2017-12-14
400
N/A
Book picture is for illustrative purposes only, actual binding, cover or edition may vary.
This is a used book - there is no escaping the fact it has been read by someone else and it will show signs of wear and previous use. Overall we expect it to be in very good condition, but if you are not entirely satisfied please get in touch with us
Trustpilot