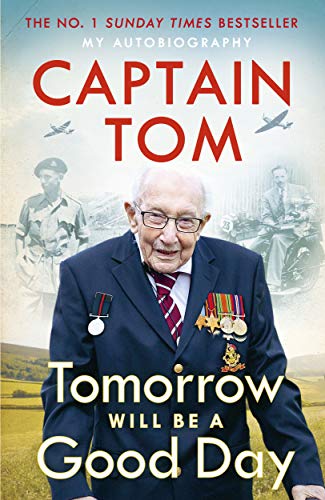 Tomorrow Will Be A Good Day by Captain Tom Moore

Tomorrow Will Be A Good Day: My Autobiography by Captain Tom Moore

Embark on an enchanting journey into our country's past hundred years through the remarkable life of Captain Sir Tom Moore.

'A wonderful life story with lessons for us all . . . beautifully written' DAILY TELEGRAPH

From his humble Yorkshire childhood, via the battlefields of Burma and the peaks of the Himalayas, to becoming the NHS and the nation's hero during Lockdown, this is a journey for all of us.
__________

Who is Captain Sir Tom Moore?

You've seen him on the television walking the length of his garden. A frail elderly man, doing his bit at a time of crisis. But he wasn't always like this.

Where did he come from? Where was he made?

From a childhood in the foothills of the Yorkshire Dales, Tom Moore grew up in a loving family, which wasn't without its share of tragedy. It was a time of plenty and of want. When the storm clouds of the Second World War threatened, he raised his hand and, like many of his generation, joined up to fight.

His war would take him from a country he had never left to a place which would steal his heart, India, and the Far East, to which he would return many years later to view the sight he had missed first time around: the distant peak of Everest.

Captain Tom's story is our story.

It is the story of our past hundred years here in Britain.

It's a time which has seen so much change, yet when so much has stayed the same: the national spirit, the can-do attitude, the belief in doing your best for others.

In this rich, happy life packed with incident you will encounter time and again the curiosity, courage and generosity that saw Captain Tom look around him during our current crisis and decide that something had to be done . . .

'Engaging . . . His upbeat nature shines through and reminds us how much worse this year would have been without him' Evening Standard

Gloriously enthralling * Daily Mail *
A riveting account. Tom is as sharp as a bayonet . . . This old soldier should never, ever fade away in our memory. Neither should his life advice * Daily Express *
Engaging . . . His upbeat nature shines through and reminds us how much worse this year would have been without him * Evening Standard *
A wonderful life story with lessons for us all . . . beautifully written * Daily Telegraph *
Captain Tom Moore has stolen the nation's hearts * Evening Standard *

Captain Tom Moore was born in Yorkshire in 1920. With the outbreak of World War Two he enlisted in the British Army and served throughout the war. He holds two Guinness World Records, for the largest sum ever raised by an individual charity walk, and for being the oldest person ever to have a number one hit single. He lives with his family in Bedfordshire. He set up the Captain Tom Foundation to help people help other people. Tomorrow Will Be a Good Day is his first book.
@captaintommoore

GOR010767086
9780241486108
0241486106
Tomorrow Will Be A Good Day: My Autobiography by Captain Tom Moore
Captain Tom Moore
Used - Very Good
Hardback
Penguin Books Ltd
2020-09-15
400
N/A
Book picture is for illustrative purposes only, actual binding, cover or edition may vary.
This is a used book - there is no escaping the fact it has been read by someone else and it will show signs of wear and previous use. Overall we expect it to be in very good condition, but if you are not entirely satisfied please get in touch with us
Trustpilot