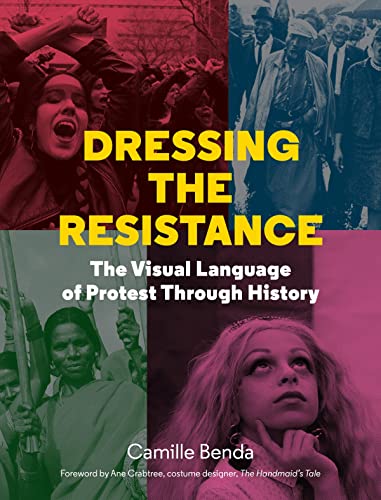 Dressing the Resistance by Camille Benda

Dressing the Resistance is a celebration of how we use clothing, fashion, and costume to ignite activism and spur social change.

Dressing the Resistance: The Visual Language of Protest by Camille Benda

Dressing the Resistance explores how everyday people have harnessed the visual power of clothing, accessories and costume to spur social and cultural change.

Throughout history, societies have used clothing to show acceptance and exclusion, convention and subversion, group belonging and rejection. In the same way, fashion, clothing, textiles and costume have served their own critical role in shaping protest movements throughout history. In short, clothing was often the most basic opportunity for groups to rebel: a simple, mundane item to express their discontent. American suffragettes made and wore dresses from old newspapers printed with voting slogans. British Punks took a humble safety pin from the household sewing kit, punched it through an earlobe and headed out to face a bleak post-war world. And male farmers in India wore their wives' saris while staging sit-ins on railroad tracks. With the advent of the Trump administration and the ensuing worldwide Women's March in January 2017, the #MeToo movement and #BlackLivesMatter, protest has again entered the American zeitgeist, this time with a stronger need for inspiration and action than ever before.

Camille Benda is the Head of Costume Design at California Institute of The Arts, School of Theatre, where she has also been appointed to a Research and Practice Fellowship on inclusive and equitable dress history. She has a Masters of Fine Art in Theatre Design from Yale School of Drama, and a Masters of Art from the Courtauld Institute in the History of Dress.
NPB9781616899882
9781616899882
1616899883
Dressing the Resistance: The Visual Language of Protest by Camille Benda
Camille Benda
New
Hardback
Princeton Architectural Press
2021-11-11
208
N/A
Book picture is for illustrative purposes only, actual binding, cover or edition may vary.
This is a new book - be the first to read this copy. With untouched pages and a perfect binding, your brand new copy is ready to be opened for the first time
Trustpilot