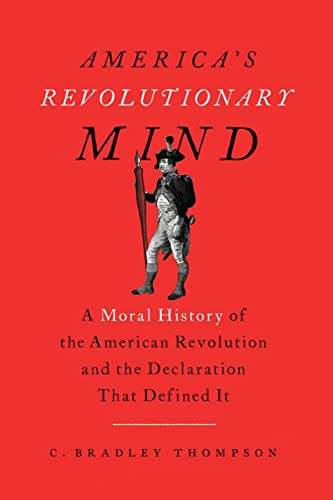 America's Revolutionary Mind: A Moral History of the American Revolution and the Declaration That Defined It by C. Bradley Thompson

The purpose of this book is twofold: first, to elucidate the logic, principles, and significance of the Declaration of Independence as the embodiment of the American mind; and, second, to shed light on what John Adams once called the real American Revolution; that is, the moral revolution that occurred in the minds of the people in the fifteen years before 1776. The Declaration is used here as an ideological road map by which to chart the intellectual and moral terrain traveled by American Revolutionaries as they searched for new moral principles to deal with the changed political circumstances of the 1760s and early 1770s. This volume identifies and analyzes the modes of reasoning, the patterns of thought, and the new moral and political principles that served American Revolutionaries first in their intellectual battle with Great Britain before 1776 and then in their attempt to create new Revolutionary societies after 1776.

The book reconstructs what amounts to a near-unified system of thought-what Thomas Jefferson called an American mind or what I call America's Revolutionary mind. This American mind was, I argue, united in its fealty to a common philosophy that was expressed in the Declaration and launched with the words, We hold these truths to be self-evident.
From one of America's most astute scholars comes an extraordinarily rich study of the ideas that propelled the United States into existence, and to greatness. C. Bradley Thompson understands not just that ideas have consequences, but that, a quarter of a millennium later, the revolutionary mind retains its relevance.-George F. Will, columnist and author of The Conservative Sensibility

Behind the American Constitution is the Declaration of Independence, Lincoln's 'apple of gold' in a 'picture of silver.' Brad Thompson here explains the apple of gold, the American revolutionary mind, and how to recover its moral power as well as its principles from the studied denigration current today. With strong argument, broad evidence, and shining clarity, this is a book that will last.-Harvey C. Mansfield, Kenan Professor of Government, Harvard University; Senior Fellow, Hoover Institution, Stanford

Since Bernard Bailyn's and Gordon Wood's work a half century ago, no study has appeared that takes us on so fruitful a voyage of rethinking, at a deep level, the moral, civic, and cultural causes and meaning of the Revolutionary era. At once eloquent and erudite, this book argues for and exemplifies a refreshingly distinguished method, or way of practicing the historian's craft: 'the new moral history'-emphasizing the thinking, judging, choosing, and acting of individuals as the true moral agents of history, rather than large-scale social processes moved by unseen tidal forces.-Thomas Pangle, Joe R. Long Chair in Democratic Studies, University of Texas at Austin

C. Bradley Thompson is Professor of Political Philosophy at Clemson University and the Executive Director of the Clemson Institute for the Study of Capitalism. He received his Ph.D at Brown University, and he has also been a visiting scholar at Princeton and Harvard universities and at the University of London. He is the author of the award-winning John Adams and the Spirit of Liberty as well as Neoconservatism: An Obituary for an Idea.
GOR012406290
9781641770668
164177066X
America's Revolutionary Mind: A Moral History of the American Revolution and the Declaration That Defined It by C. Bradley Thompson
C. Bradley Thompson
Used - Like New
Hardback
Encounter Books,USA
20191219
584
N/A
Book picture is for illustrative purposes only, actual binding, cover or edition may vary.
The book has been read, but looks new. The book cover has no visible wear, and the dust jacket is included if applicable. No missing or damaged pages, no tears, possible very minimal creasing, no underlining or highlighting of text, and no writing in the margins
Trustpilot