Analog In, Digital Out Brendan Dawes 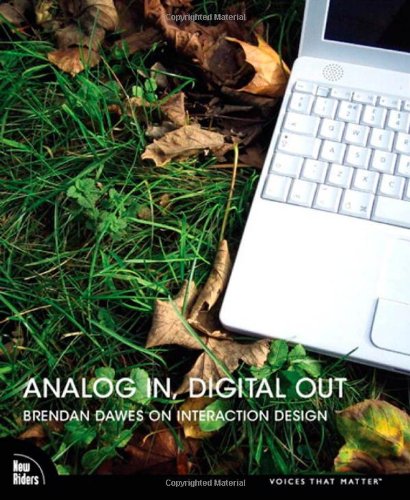 Analog In, Digital Out by Brendan Dawes

Invites readers inside the author's personal projects to get a view of his process - his creative seeing, making, and playing. Here, he aims to encourage designers to look beyond the normal tools of their trade to find inspiration in the most unlikely of places. He shares the techniques he has created and the key lessons he has learned in design.

Creativity is an innate human impulse, many people believe, something we're born with but too often grow out of as adult lives make more and more demands. Fortunately for us, the creative drive continues to run strong in legendary designer Brendan Dawes. Habitually alert to the happy accident, and possessed of highly eclectic interests and a quirky wit, he has happened into his perfect career. Around this habit-call it a philosophy-of asking, Why does this have to be this way? What if . . ., Dawes has built magneticNorth, an acclaimed Web and interaction design practice, based in Manchester, U.K. In this unique book, Dawes invites readers inside a series of his personal projects to get a view of his process--his creative seeing, making, and playing. He encourages designers to look beyond the normal tools of their trade to find inspiration in the most unlikely of places: tubs of children's clay, anonymous notes, household plumbing fixtures, jazz music, snow globes, fast-food take-out bags, airport departure gates, and more. Brilliant, original, and always grounded in the needs of users, Dawes shares both the techniques he has created and the key lessons he has learned in design: why comfort is the enemy of creativity; how mistakes can be celebrated instead of feared, and how to strip design to its purest and most powerful forms. Known worldwide for his entertaining and inspirational presentations, Dawes now brings profound insights to a book that is certain to become a classic inspiration for designers of every type. Brendan Dawes is Creative Director of the interactive design group magneticNorth, based in Manchester, UK. His clients include the Walt Disney Co., the BBC, Kellogg's, and Coca-Cola. Dawes' work has been featured in numerous journals, including idN, Creative Review, MacUser, Computer Arts, Create, The Guardian, and Communications Arts. He was also featured in New Masters of Flash and other books, and is the author of Flash ActionScript for Designers: Dra,g Slide, Fade. Dawes spends much of the year speaking at conferences around the world, including the HOW Design Conference and Flashforward .
Brendan's book offers a deeply personal, approachable and honest
account of his creative process and how he comes up with great ideas
and designs for interactive experiences. This book is a true joy to
read that's infused with clever visual punctuation to every page and
story. Destined to become a classic design tome that will help
readers tap into their own processes and creativity.

It reminded me very much of the approach we took at Antirom. It's really about playing with these new forms, technologies and cultures and trying to discern some interesting features about them and the underlying language. Any interaction designer, all students and pretty much anyone else involved in coming up with ideas for a living should have a copy.

BrendanDawes is Creative Director with interactive design group magneticNorth, based in Manchester, UK. His portfolio of work includes projects for Disney, the BBC, Kellogg's, and Coca-Cola. Over the years Brendan's work has been featured in numerous journals including idN, Creative Review, MacUser, Computer Arts, Create, The Guardian and Communications Arts. He has also been featured in various books including New Masters of Flash, and is the author of Drag Slide Fade - Flash Actionscript for Designers. Brendan spends much of the year speaking at various conferences around the world including the HOW Design Conference Chicago and Flashforward New York.
GOR003329957
9780321429162
0321429168
Analog In, Digital Out: Brendan Dawes on Interaction Design by Brendan Dawes
Brendan Dawes
Used - Very Good
Paperback
Pearson Education (US)
20060914
336
N/A
Book picture is for illustrative purposes only, actual binding, cover or edition may vary.
This is a used book - there is no escaping the fact it has been read by someone else and it will show signs of wear and previous use. Overall we expect it to be in very good condition, but if you are not entirely satisfied please get in touch with us
Trustpilot