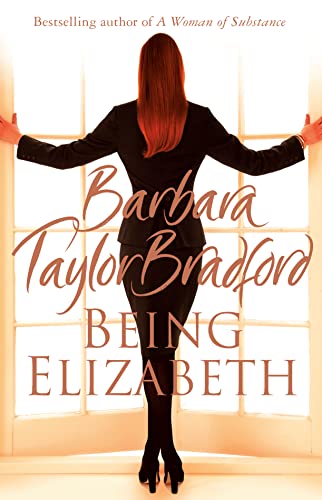 Being Elizabeth by Barbara Taylor Bradford

Being Elizabeth by Barbara Taylor Bradford

Elizabeth Turner, scion of the fabled Deravenel family, carries the red-gold hair and beautiful English complexion of her ancestors. And it is not just her colouring that she has inherited from Edward Deravenel. Astute and charismatic, she is also bold, daring and fiercely ambitious, with the same ruthless streak.

Now, aged just twenty-five, she stands in the position she has dreamed of - inheriting the family business, Deravenels. Over eight hundred years old, the company is a bastion of male chauvinism and the challenge that lies ahead of Elizabeth is immense. She also has to cope with the enmity of her cousin Mary who misguidedly believes she is the rightful heir.

Cecil Williams acts as Elizabeth's mentor while navigating the treacherous corridors of power with her. But her greatest ally is her childhood friend, handsome, charming Robert Dunley. Highly intelligent, he is her match in every way - and there is a spark between them that is impossible to resist. Yet Robert is already married. When they begin an affair it scandalises those around them. But far worse is to come...

From the family seat perched high on the Yorkshire moors to the glamour of London as the twentieth century draws to a close, Elizabeth fights for her birthright and her inheritance. Passion, drama, betrayal and death stalk the pages of this gripping new blockbuster from the author of A Woman of Substance.

`The storyteller of substance' The Times

'Queen of the genre' Sunday Times

Barbara Taylor Bradford was born and raised in England. She started her writing career on the Yorkshire Evening Post and later worked as a journalist in London. Her first novel, A Woman of Substance, became an enduring bestseller and was followed by twenty-three others, including the bestselling Harte series. In 2006 The Ravenscar Dynasty began an epic new family series around Ravenscar and the house of Deravenel. Barbara's books have sold more than eighty-one million copies worldwide in more than ninety countries and forty languages. In October of 2007, Barbara was appointed an OBE by the Queen for her services to literature. She lives in New York City with her husband, television producer Robert Bradford.

GOR000635816
9780007197651
0007197659
Being Elizabeth by Barbara Taylor Bradford
Barbara Taylor Bradford
Used - Very Good
Hardback
HarperCollins Publishers
2008-10-01
432
N/A
Book picture is for illustrative purposes only, actual binding, cover or edition may vary.
This is a used book - there is no escaping the fact it has been read by someone else and it will show signs of wear and previous use. Overall we expect it to be in very good condition, but if you are not entirely satisfied please get in touch with us
Trustpilot