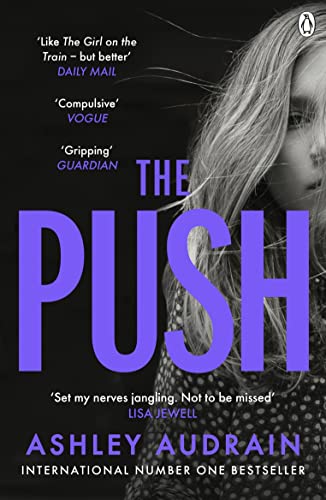 The Push by Ashley Audrain

THE MOST BREATHTAKING DEBUT ABOUT MOTHERHOOD AND OBSESSION YOU'VE EVER READ . . . A BLOCKBUSTER INTERNATIONAL BESTSELLER

Blythe and Violet. Mother and daughter.

But what if your little angel is a monster?

AS RECOMMENDED ON BBC RADIO 2

'Like The Girl on the Train - but better!' DAILY MAIL

'A blockbusting debut about the dark side of motherhood. Gripping, clever, vividly realised . . . the ending left me flabbergasted' GUARDIAN

'I read it in one sitting. Not to be missed' LISA JEWELL

'I can't stop thinking and talking about it . . . it has absolutely blown me away' CANDICE BRATHWAITE

'I was gripped from the first word to the last. I've been wanting a book to take me back to how I felt when I first read We Need to Talk About Kevin. That full body experience of reading, when you close the book but can't function until you know how it ends . . . I really recommend this one' DAWN O'PORTER

'Powerful and immersive' EMMA STONEX, author of The Lamplighters

'A suspenseful thriller. Will have you in its grips from the very first page - and stay with you long after you've put it down. Do not miss' Heat

'The most thought-provoking exploration of motherhood since We Need to Talk About Kevin' Clare Pooley, bestselling author of The Authenticity Project

'Fans of 'mum noir' are in for a treat' Daily Mail

**Soon to be adapted for the screen by the producer of Once Upon a Time . . . in Hollywood, Marriage Story and Gravity**