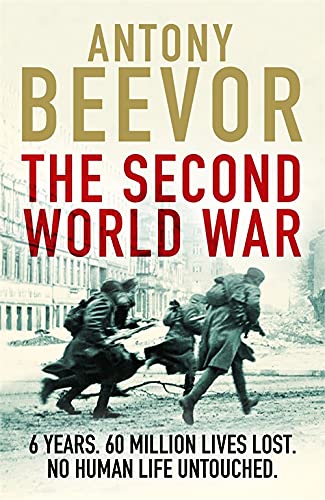 A magisterial, single-volume history of the greatest conflict the world has ever known by our foremost military historian.

A magisterial, single-volume history of the greatest conflict the world has ever known by our foremost military historian.

The Second World War began in August 1939 on the edge of Manchuria and ended there exactly six years later with the Soviet invasion of northern China. The war in Europe appeared completely divorced from the war in the Pacific and China, and yet events on opposite sides of the world had profound effects. Using the most up-to-date scholarship and research, Beevor assembles the whole picture in a gripping narrative that extends from the North Atlantic to the South Pacific and from the snowbound steppe to the North African Desert.

Although filling the broadest canvas on a heroic scale, Beevor's The Second World War never loses sight of the fate of the ordinary soldiers and civilians whose lives were crushed by the titanic forces unleashed in this, the most terrible war in history.

His singular ability to make huge historical events accessible to a general audience recalls the golden age of British narrative history, whose giants include Gibbon, Macaulay and Carlyle -- Boyd Tonkin * INDEPENDENT *
Beevor can be credited with single-handedly transforming the reputation of military history -- David Edgar * GUARDIAN *
The myriad pieces of this intricate kaleidoscope are pieced together with exemplary skill ... This is a splendid book, erudite, with an admirable clarity of thought and expression -- Roger Moorhouse * INDEPENDENT ON SUNDAY *
His accounts of the key moments in the Second World War have a sense of colour, drama and immediacy that few narrative historians can match -- Dominic Sandbrook * SUNDAY TIMES *
You feel yourself being carried along on the narrative flow, channelled this way and that through the pools and rapids by Beevor's expert helmanship -- Patrick Bishop * STANDPOINT *
Brocaded with details of the great campaigns and thoughtful explanations of Hitler's murderous belligerence, The Second World War is an absorbing, unsparingly lucid work of military history -- Ian Thomson * THE SPECTATOR *
Beevor's book is a pleasure to read and an example of intelligent, lively historical writing at its best -- Tony Barber * FINANCIAL TIMES *
This is as comprehensive and objective an account of the course of the war as we are likely to get, and the most humanly moving to date -- John Gray * NEW STATESMAN *
A British historian of great distinction and range, who ... demonstrates his mastery of his sources -- Gordon Craig * NEW YORK REVIEW OF BOOKS *
A magnificent performance - true excitement from one page to the next delivered in faultless prose -- Christoper Silvester * DAILY EXPRESS *
Beevor is excellent at catching the individual in the flood-tide of events -- John Lewis-Stempel * SUNDAY EXPRESS *
The book could not really have been done better * MILITARY HISTORY MONTHLY *
If you want to understand the war as military struggle, this book is all you really need. However well you thought you knew the subject, you will learn something new on every page. -- Neill Denny * WE LOVE THIS BOOK online *
A truly outstanding historian of war -- Michael Howard * STANDPOINT *
Everyone who is interested in the Second World War should read this book. -- Laurence Rees * WW2HISTORY.COM *
The book that Beevor has been building towards writing - and everybody else has been anticipating reading. -- Donal O'Donoghue * RTE GUIDE *
remarkably well-written and informative -- Norman Stone * LITERARY REVIEW *
This is the place to begin if you need to get your knowledge of the war in order. -- Hew Strachan * EVENING STANDARD *
This is history writ large. -- James Owen * THE SUNDAY TELEGRAPH magazine *
the whole story told in the author's usual erudite yet highly readable prose * DESPATCHES Magazine *
The heart of Beevor's appeal is precisely that straightforward narrative approach, coupled with his lively, engaging style and his use of memorable, almost cinematic, set-pieces. * HISTORY TODAY *
He is the most humanitarian of historians, and covers huge sweeps of history through the real stories of the individuals who experienced them. Reading this will be like having him walk me through the history of the war like a personal guide. -- Kate Mosse
This is a book demanding to be read. -- Christoper Bray * THE OXFORD TIMES *
a masterly understanding of the conflict's many facets * THE MAIL ON SUNDAY *
For as harrowing and politically convoluted as the years 1939-1945 were, Beevor writes with such a panache and literary flair, that the reader is almost uncannily charged to keep turning the pages at a rate of ten by ten, twenty by twenty, chapter by chapter - until such point that s/he has stumbled upon the end as if by chance, as if by default. -- David Marx
By deploying his keen eye for tiny detail and penchant for story telling, and then marrying them both with an acute historical investigation, Antony Beevor has once again written a book that is simply superlative. -- David Marx
This imposing history can both be read as a whole or dipped into, and never fails to inform. * WHO DO YOU THINK YOU ARE? *
This book is a perfect mixture of world history and human experience, unbiased and highly readable. * THE JOURNAL *
As we have come to expect from this master, he excels at using eye-witness testimony to illustrate how mankind can be capable of both terrible cruelty and astonishing courage. -- Andrew Rawnsley * THE OBSERVER *
global history at its grandest and best * THE DAILY TELEGRAPH *
the most incredibly detailed research -- Chris Tarrant * THE SUNDAY EXPRESS MAGAZINE *
a truly rewarding account of the global conflict. Beevor has a special gift for linking great events with individual testimony -- Amanda Foreman * MAIL ON SUNDAY *
In his books on Stalingrad and Berlin, Beevor used evidence from ordinary people to bring home the reality of life at the front as opposed to the traditional HQ view... He crams in so much and does it so well because he can. * GOOD BOOK GUIDE *

Antony Beevor served as a regular officer in the 11th Hussars in Germany. He is the author of Crete - The Battle and the Resistance, which won a Runciman Prize, Paris After the Liberation, 1944-1949 (written with his wife Artemis Cooper), Stalingrad, which won the Samuel Johnson Prize, the Wolfson Prize for History and the Hawthornden Prize for Literature, Berlin - The Downfall, which received the first Longman-History Today Trustees' Award, and The Mystery of Olga Chekhova. Stalingrad and Berlin have been translated into twenty-five languages and sold more than two and a quarter million copies between them. His latest work, A Writer at War - Vasily Grossman with the Red Army 1941-1945, is an edition, with his Russian researcher, Dr Luba Vinogradova, of Grossman's wartime notebooks.

A fellow of the Royal Society of Literature and Chevalier de l'Ordre des Arts et Lettres in France, Antony Beevor has also been the chairman of the Society of Authors and is a visiting professor at the School of History, Classics and Archaeology at Birkbeck College, University of London. He lives in London and Kent and has a daughter and a son.


Go to www.antonybeevor.com for more information. Antony Beevor is on Twitter at https://twitter.com/antonybeevor, and on Facebook at www.facebook.com/pages/Antony-Beevor

GOR006214361
9781780225647
1780225644
The Second World War by Antony Beevor
Antony Beevor
Used - Very Good
Paperback
Orion Publishing Co
2014-09-18
1024
N/A
Book picture is for illustrative purposes only, actual binding, cover or edition may vary.
This is a used book - there is no escaping the fact it has been read by someone else and it will show signs of wear and previous use. Overall we expect it to be in very good condition, but if you are not entirely satisfied please get in touch with us
Trustpilot