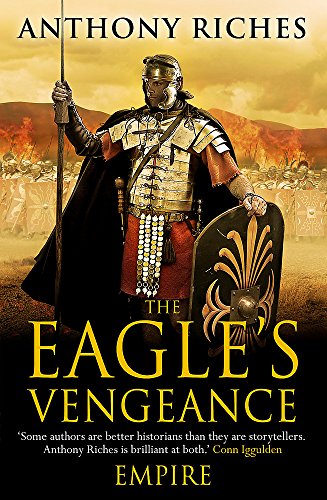 The barbarian leader Calgus defies both his barbarian captors and Britannia's legions - and Marcus Aquila - once more in the sixth thrilling novel in the Empire sequence, praised by fellow-authors Conn Iggulden, Ben Kane and Manda Scott.

'A master of the genre' The Times

The Tungrian auxiliary cohorts return to Hadrian's Wall after their successful Dacian campaign, only to find Britannia in chaos. The legions are overstretched, struggling to man the forts of the northern frontier in the face of increasing barbarian resistance.

The Tungrians are the only soldiers who can be sent into the northern wastes, far beyond the long abandoned wall built by Antoninus, where a lost symbol of imperial power of the Sixth Victorious Legion is reputed to await them. Protected by an impassable swamp and hidden in a fortress atop a high mountain, the eagle of the Sixth legion must be recovered if the legion is to survive.

Marcus and his men must penetrate the heart of the enemy's strength, ghosting through a deadly wilderness patrolled by vicious huntresses before breaching the walls of the Fang, an all-but-impregnable fort, if they are to rescue the legion's venerated standard. If successful their escape will be twice as perilous, with the might of a barbarian tribe at their heels.

Anthony Riches began his lifelong interest in war and soldiers when he first heard his father's stories about World War II. This led to a degree in Military Studies at Manchester University. He began writing the story that would become Wounds of Honour after a visit to Housesteads in 1996. He lives in Hertfordshire with his wife and three children.

GOR005876427
9781444711929
144471192X
The Eagle's Vengeance: Empire VI by Anthony Riches
Anthony Riches
Empire series
Used - Very Good
Paperback
Hodder & Stoughton
2014-03-27
384
N/A
Book picture is for illustrative purposes only, actual binding, cover or edition may vary.
This is a used book - there is no escaping the fact it has been read by someone else and it will show signs of wear and previous use. Overall we expect it to be in very good condition, but if you are not entirely satisfied please get in touch with us
Trustpilot