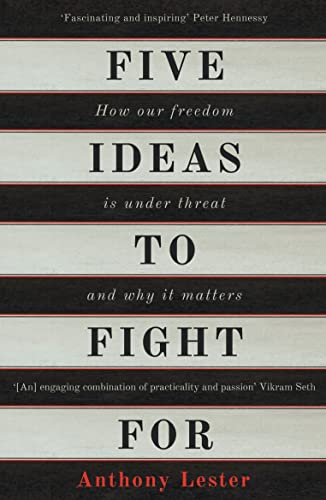 Five Ideas to Fight For by Anthony Lester

Five Ideas to Fight For: How Our Freedom is Under Threat and Why it Matters by Anthony Lester

These five ideas are vitally important to the way of life we enjoy today. The battle to establish them in law was long and difficult, and Anthony Lester was at the heart of the thirty-year campaign that resulted in the Human Rights Act, as well as the struggle for race and gender equality that culminated in the Equality Act of 2010.

Today, however, our society is at risk of becoming less equal. From Snowden's revelations about the power and reach of our own intelligence agencies to the treatment of British Muslims, our civil liberties are under threat as never before. The internet leaves our privacy in jeopardy in myriad ways, our efforts to combat extremism curtail free speech, and cuts to legal aid and interference with access to justice endanger the rule of law. A fierce argument for why we must act now to ensure the survival of the ideals that enable us to live freely, Five Ideas to Fight For is a revealing account of what we need to protect our hard-won rights and freedoms.

'Illuminating and accessible...[Lester] speaks with enormous authority...Five Ideas to Fight For summarises what we have gained, and the dangers we still face from political hostility, ignorance and apathy.'

'Lester has dedicated his life to these causes. His personal anecdotes...are often frank admissions of how hard his work has been...This is what gives his book its special quality: few other lawyers would be able to do the subject matter justice.'

'Passionate, and personal...nobody could finish Five Ideas To Fight For doubting that Anthony Lester has been an immense force for good.'

'A powerful rallying cry for the creation of a civilised world made by the founding father of modern human rights in the UK - a hero of our times.'

'Tells the story of an unparalleled life and work shaping the law. Anthony Lester inspires us to defend our Human Rights Act in difficult times.'

'Anthony Lester has long been one of our foremost champions of human rights and free speech. How wonderful that he has now gathered his years of experience into a book that tells us why these values matter.'

'All the forces that, for decades, abused the human rights of the thalidomide children, are on the rise again in an ugly xenophobic populism: those who have the loudest voices have the smallest vision. They must be repulsed and there is no better person to summon us to the ramparts than the author of this exciting book.'

'His five principles are of immense importance to everyone in this country. They go to the heart of British values... His spirited defence of the Five Ideas and why and how they must be defended, deserves to reach the largest possible audience.'

'Anthony Lester has throughout his life - and often far in advance of his times - been an eloquent fighter for freedom of speech, equality under the law, protection from official arbitrariness and much else besides. His views and actions - as lawyer, legislator and citizen - have often irked those in power but have conduced to justice, human dignity and a sense of reasonableness and decency in the world around him. In this book he combines legal and political argument with telling personal anecdote - and he does so with a most engaging combination of practicality and passion.'

'In this stirring call to action, Britain's greatest human rights lawyer issues a challenging, and compelling, agenda for change.'

-- Harold Hongju Koh, Sterling Professor of International Law at Yale Law School and former Legal Adviser to the US Department of State under President Obama

'A finely written and scrupulously accurate account of how human rights stand in Britain today and a clarion call for further struggle fully to achieve them... eloquent, liberal and street-wise, Lord Lester makes a compelling case against complacency... a book that should be required reading for MPs, newspaper editors and civil servants, so many of whom fail to understand the importance to our nation of protecting and enhancing civil liberties.'

'This is not just another book on human rights. Anthony Lester's Five Ideas are those which have made the United Kingdom a free country. He himself has fought to maintain them, both in the courts and in Parliament, often with signal success. His account is practical and realistic - and a very good read.'

'Five Ideas to Fight For is the powerful and provocative distillation of a lifetime of conviction and reminds us all in Lord Lester's own words that there is never a time for apathy - especially now.'

'Anthony Lester has spent his life in the dedicated pursuit of freedom and justice, both as a lawyer and as a member of the House of Lords. We need to listen to his urgent case for upholding these core values and be inspired by the courage and passion with which he continues to fight for them.'

'Animated by the desire to protect fundamental human rights and freedoms in a long and distinguished career in law as a practitioner and lawmaker, Anthony Lester makes a passionate case for the defence of these rights - so hard won and so much under threat today. The legal arena has become an important part of the political struggle for change, a development that is mapped in this beautifully accessible book.'

'This powerful, elegant book is a distillation of decades of commitment to the advancement of human rights across the globe by one of the foremost lawyers of our time. It is a clarion call to action for all of us, in the United States as much as in his own country. Five Ideas to Fight For should be required reading for every lawyer and every politician.'

'Anthony Lester has pioneered a new style of autobiography. It links his intellectual, philosophical and legal journeys through life with both great principles and his most cherished causes. It works. A fascinating and inspiring read.'

'Anthony Lester is one of the world's foremost advocates of rights. His advocacy reflects his deep understanding of the principles at stake, his formidable skills as a litigator, and his passionate commitments in dealing with such issues as equality and freedom of expression. Reading this book is like holding a conversation with him. His opinions and his arguments are bracing and incisive and the entire experience is intellectually exciting.'

'Anthony Lester's legacy of laws that promote equality, uphold individual liberty and protect human rights, is a remarkable one.'

Anthony Lester QC is Britain's most eminent human rights lawyer. In 2007, he received the Liberty and Justice Judges' Award for a lifetime of achievement in the service of human rights. He is a Liberal Democrat Peer and a frequent commentator on law and public policy.

NGR9781786070883
9781786070883
178607088X
Five Ideas to Fight For: How Our Freedom is Under Threat and Why it Matters by Anthony Lester
Anthony Lester
New
Paperback
Oneworld Publications
20170302
256
N/A
Book picture is for illustrative purposes only, actual binding, cover or edition may vary.
This is a new book - be the first to read this copy. With untouched pages and a perfect binding, your brand new copy is ready to be opened for the first time
Trustpilot