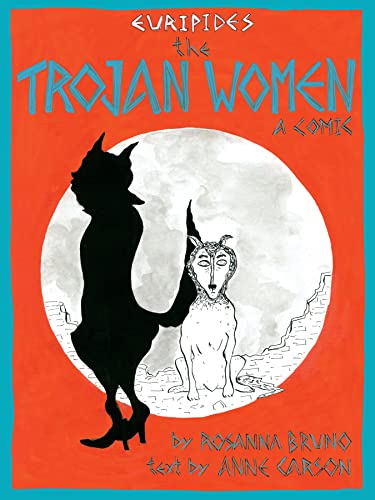 The Trojan Women by Anne Carson

This new comic-book version of Euripides' classic The Trojan Women follows the fates of Hekabe, Andromache and Kassandra after Troy has been sacked and all its men killed. The Trojan Women is a wildly imaginative collaboration between the visual artist Rosanna Bruno and the poet and classicist Anne Carson.

The Trojan Women: a comic by Anne Carson

This new comic-book version of Euripides' classic The Trojan Women follows the fates of Hekabe, Andromache and Kassandra after Troy has been sacked and all its men killed. The Trojan Women is a wildly imaginative collaboration between the visual artist Rosanna Bruno and the poet and classicist Anne Carson. Both wacky and devastating, the book gives a genuine representation of how human beings are affected by warfare. All the characters take the form of animals (except Kassandra, whose mind is in another world). Anne Carson collaborated with artist Bianca Stone on their Sophokles reimagining, Antigonick, published by Bloodaxe in 2012. This new collaboration with Rosanna Bruno couldn't be more different. Rosanna Bruno is an artist who makes paintings, comics and bad puns. Her first book, The Slanted Life of Emily Dickinson (Andrews McMeel, 2017), is a book of cartoons based on the myth of her life.
What do you get when you cross Euripides' classic tragedy, the artistic stylings of Rosanna Bruno, and the poetic touch of Anne Carson? This book! Here's what we know: Troy has been ravaged. Everyone is depicted as an animal (except Kassandra, who is another planet, which actually makes complete sense when you think about it). Need I say more? -- Lithub
'In her classical translations, Carson has pursued what T.S. Eliot called a continuous parallel between contemporaneity and antiquity.' - Will Harrison, BOMB 'Rosanna Bruno's speculative look at Emily Dickinson's social media feed is so hysterical, you may find yourself with a case of the vapors. ' - Alison Bechdel 'Anne Carson is a daring, learned, unsettling writer.' - Susan Sontag From the reviews of Antigonick by Anne Carson and Bianca Stone: 'The comic-book translation is zingy and modern... Carson has perfectly captured Antigone's moral fervour and her almost erotic desire for death. The snappiness of her translation hits a different note from Sophocles, but this edition is a treat none the less' - Natalie Haynes, Observer 'Unlike versions of Antigone that try to capture the drama's grandeur (such as Robert Fagles's translation for Penguin) or to make it relevant (including Don Taylor's version, currently at the National Theatre), Carson's aims to show the difficulty of translation, the truly unbearable nature of tragedy' - Emily Stokes, Guardian 'Antigonick questions what it means to translate Greek drama... For Carson, her uncompromising solutions are little kidnaps in the dark, a trail of softly glowing lamps that mark the way through the centuries and out of the shadows' - Josephine Balmer, Times 'Antigonick by Anne Carson; everything this classicist-poet writes is worth repeated close reading. This is also a beautiful book.' - Candia McWilliam, Sunday Herald, Books of the Year 2013
Anne Carson was born in Canada and teaches ancient Greek for a living. She is author of The Autobiography of Red, The Beauty of the Husband, Decreation, Economy of the Unlost, Eros the Bittersweet, Glass, Irony and God, Grief Lessons, If Not, Winter, Men in the Off Hours, Norma Jean Baker of Troy, Nox, Plainwater and Red Doc>. Antigonick, her translation of Sophokles' play Antigone, was published in 2012 by New Directions (USA) and Bloodaxe Books (UK) in a hardback edition with illustrations by Bianca Stone. Antigonick won the 2012 Criticos Prize for an original work, written in (or translated into) English, inspired by Greece or Greek exploits, culture or history. Her latest book is The Trojan Women, a collaboration with Rosanna Bruno in a comic book reimagining of Euripides' tragedy, published in 2021 by New Directions (USA) and Bloodaxe Books (UK). Rosanna Bruno is a visual artist and based in New York, where she makes paintings, comics, and - sometimes - a mess. She received a New York Foundation for the Arts grant in 2012. Her paintings have been exhibited internationally, and her cartoons have been published in BOMB magazine and featured in The Daily Beast and The Toast, among other publications. Her first book, The Slanted Life of Emily Dickinson (Andrews McMeel, 2017), is a book of cartoons based on the myth of her life. Her second is The Trojan Women (Bloodaxe Books, 2021), a comic book reimagining of Euripides' tragedy with texts by Anne Carson. Euripides (c. 480-406 BC) was a tragedian of classical Athens, the author of nearly a hundred plays, of which only 18 or 19 have survived more or less complete. More of his plays have survived intact than those of Aeschylus and Sophocles together, partly due to chance and partly because his popularity grew as theirs went into decline.
NGR9781780375908
9781780375908
1780375905
The Trojan Women: a comic by Anne Carson
Anne Carson
New
Paperback
Bloodaxe Books Ltd
20210518
80
null null null null null null null null null null
Book picture is for illustrative purposes only, actual binding, cover or edition may vary.
This is a new book - be the first to read this copy. With untouched pages and a perfect binding, your brand new copy is ready to be opened for the first time
Trustpilot