The Blooding of the Guns Alexander Fullerton 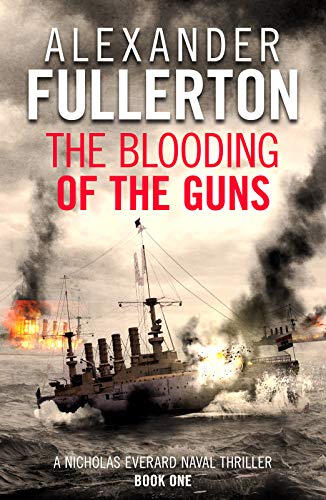 The Blooding of the Guns by Alexander Fullerton

The Blooding of the Guns by Alexander Fullerton

A young sailor with the weight of the world on his shoulders, a brother in the line of fire, and the greatest naval battle of all time...

Jutland, 1916: In the icy waters of the North Sea, the Royal Navy awaits the challenge of the Kaiser's High Sea Fleet.

Sub-lieutenant Nick Everard could never have imagined the terror he would face as his destroyer races to launch its torpedoes into the blazing guns of a horizon obscured by dreadnoughts.

But when the steering-gear on HMS Warspite jams, it is up to Nick, along with his brother, Hugh, to save thousands of lives.

Dramatic, action-packed and brimming with suspense, The Blooding of the Guns launches the epic career of Nicholas Everard, and is perfect for fans of C. S. Forrester, Max Hennessy and Alan Evans.

Alexander Fullerton was a bestselling author of British naval fiction, whose writing career spanned over fifty years. He served with distinction as gunnery and torpedo officer of HM Submarine Seadog during World War Two. He was a fluent Russian speaker, and after the war served in Germany as the Royal Navy liaison with the Red Army. His first novel, Surface!, was written on the backs of old cargo manifests. It sold over 500,000 copies and needed five reprints in six weeks. Fullerton is perhaps best known though for his nine-volume Nicholas Everard series, which was translated into many languages, winning him fans all round the world. His fiftieth novel, Submariner, was published in 2008, the year of his death.
GOR011364733
9781788634083
178863408X
The Blooding of the Guns by Alexander Fullerton
Alexander Fullerton
Nicholas Everard Naval Thrillers
Used - Like New
Paperback
Canelo
2019-05-09
352
N/A
Book picture is for illustrative purposes only, actual binding, cover or edition may vary.
The book has been read, but looks new. The book cover has no visible wear, and the dust jacket is included if applicable. No missing or damaged pages, no tears, possible very minimal creasing, no underlining or highlighting of text, and no writing in the margins
Trustpilot