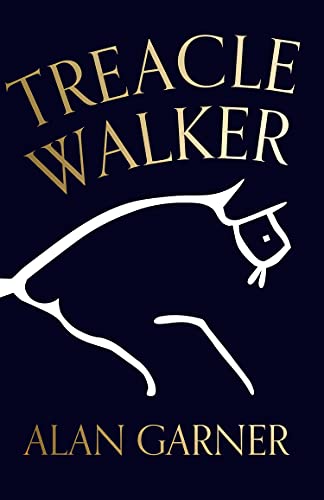 Treacle Walker is a stunning fusion of myth and folklore and an exploration of the fluidity of time, vivid storytelling that brilliantly illuminates an introspective young mind trying to make sense of everything around him.

Treacle Walker is a stunning fusion of myth and folklore and an exploration of the fluidity of time, vivid storytelling that brilliantly illuminates an introspective young mind trying to make sense of everything around him.

Joe looked up from his comic and lifted his eye patch. There was a white pony in the yard. It was harnessed to a cart, a flat cart, with a wooden chest on it. A man was sitting at a front corner of the cart, holding the reins. His face was creased. He wore a long coat and a floppy high-crowned hat, with hair straggling beneath, and a leather bag was slung from his shoulder across his hip.

Joe Coppock squints at the world with his lazy eye. He reads his comics, collects birds' eggs and treasures his marbles, particularly his prized dobbers. When Treacle Walker appears off the Cheshire moor one day - a wanderer, a healer - an unlikely friendship is forged and the young boy is introduced to a world he could never have imagined.

Praise for Where Shall We Run To:

'In old age childhood memories become vivid again and it's the present that disappears behind a confusion of vivid fragments. In this book, Garner, now old, has faced that pattern and in place of the bewildering, wonky memory of old age, produced something precise and fresh as flowers. He has become - as we're told we must - as a little child. He's also produced one of the best things he's ever written.' Frank Cotterell-Boyce, New Statesman

'Its encounters are vivid and immediate, but it is also an examination of class and change in the England of those years.' Erica Wagner, Financial Times

'Every street, every house, every carved stone, mysterious well, dark pond and perilously steep cliff-edge is remembered and described, as Garner roams through it, with a succession of companions.... Garner's detailed recall of so many characters and events is extraordinary' Sue Gaisford, The Tablet

'In this slight but charming memoir about his wartime childhood in Alderley Edge, Garner has pulled off the same trick - making the Cheshire landscape feel fresh, while bringing a new perspective to a tried and tested literary form..and Oh, what language' Ben Lawrence, Sunday Telegraph

'This is a book very much about reading and writing, about the marks that we use to give life meaning, whether they are a tramp's chalk-mark on a wall or the comics and Arthur Mee's The Children's Encyclopaedia that allow young Alan to get past block capitals and closer to Real Writing. It is also a book written without a single scrap of hindsight, or rationalisation of the past. This, then, is a writer's memoir' Brian Morton, Herald

Alan Garner was born in Cheshire on 17th October 1934, and his childhood was spent in Alderley Edge, where his family has lived for more than four hundred years. He was awarded the OBE in 2001, for his services to literature.

GOR011863314
9780008477790
0008477795
Treacle Walker by Alan Garner
Alan Garner
Used - Very Good
Hardback
HarperCollins Publishers
2021-10-28
160
N/A
Book picture is for illustrative purposes only, actual binding, cover or edition may vary.
This is a used book - there is no escaping the fact it has been read by someone else and it will show signs of wear and previous use. Overall we expect it to be in very good condition, but if you are not entirely satisfied please get in touch with us
Trustpilot