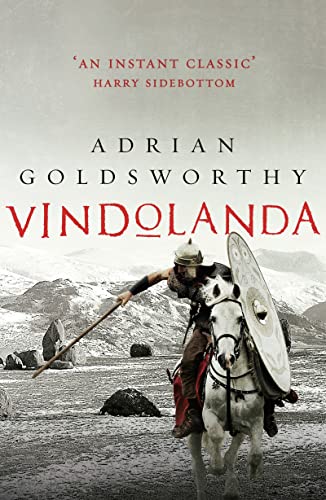 AD 98: The army base at Vindolanda lies on the northern frontier of Britannia and the entire Roman world. Defences are weak, as tribes rebel against Roman rule, and local druids preach the fiery destruction of the invaders.

AD 98: VINDOLANDA.
A FORT ON THE EDGE OF THE ROMAN WORLD.

The bustling army base at Vindolanda lies on the northern frontier of Britannia and the entire Roman world. In just over twenty years time, the Emperor Hadrian will build his famous wall. But for now defences are weak as tribes rebel against Rome, and local druids preach the fiery destruction of the invaders.

It falls to Flavius Ferox, Briton and Roman centurion, to keep the peace. But it will take more than just a soldier's courage to survive life in Roman Britain.

This is a hugely authentic historical novel, written by one of Britain's leading historians.

'An instant classic of the genre. No historian knows more about the Roman army than Adrian Goldsworthy, and no novelist better recreates the Classical World. Flavius Ferox, Briton turned Roman Centurion is a wonderful, charismatic hero. Action and authenticity combine in a thrilling and engrossing novel' Harry Sidebottom.
'An authentic, enjoyable read' The Times.
'A well-written and authoritative novel that is always enjoyable and entertaining' For Winter Nights.
'Don't be surprised if you see Vindolanda in the starting line-up for Historical Fiction Book of the Year 2017' Weekend Sport.
'Much more accurate than the usual action fiction about legionaries and Rome ... Vindolanda brings the reader closer to the true nature of Roman Britain' New Books Magazine.
'Complex and interesting, Vindolanda is definitely worth a read if you like history - and if you like your mystery with a solid dollop of action. Go Rome!' Roaring Bookworm.
'Gritty and realistic ... Goldsworthy's characters are authentically ancient and his descriptions of Roman Briton ring true' Troy Lennon, Daily Telegraph (Sidney).
'Feels like an incredibly authentic view of life on the far reaches of the Roman Empire. Plenty of action and a cracking read for lovers of historical fiction or fans of Roman history' What Cathy Read Next.

Adrian Goldsworthy studied at Oxford and became an acclaimed historian of Ancient Rome. He is the author of several books, including Anthony and Cleopatra, Caesar, and The Fall of the West, as well as another adventure starring Flavius Ferox, The Encircling Sea. Visit adriangoldsworthy.com.

GOR008828971
9781784974701
1784974706
Vindolanda by Adrian Goldsworthy
Adrian Goldsworthy
Vindolanda
Used - Very Good
Paperback
Head of Zeus
2017-11-16
416
N/A
Book picture is for illustrative purposes only, actual binding, cover or edition may vary.
This is a used book - there is no escaping the fact it has been read by someone else and it will show signs of wear and previous use. Overall we expect it to be in very good condition, but if you are not entirely satisfied please get in touch with us
Trustpilot