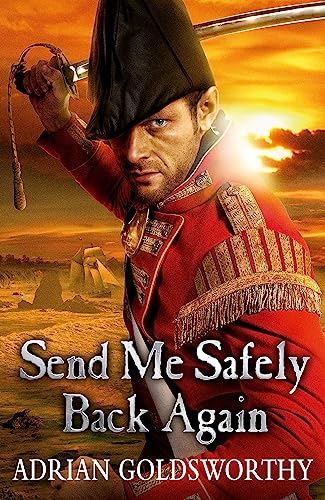 Send Me Safely Back Again by Adrian Goldsworthy

Send Me Safely Back Again by Adrian Goldsworthy

The third novel in this brilliant Napoleonic series from acclaimed historian, Adrian Goldsworthy.

The third novel in the series sees new challenges for the men of the 106th Foot, as the British army attempts to recover from the disaster of Corunna and establish a foothold in the Peninsula. Featuring the battles of Medellin and Talavera, the 106th will have their mettle severely tested on the battlefield.

But if Napoleon is to be ejected from Spain, war must also be waged in more covert ways. For Hanley, the former artist who is a more natural observer than fighter, the opportunity to become an 'exploring officer' leads him into even more dangerous territory, the murky world of politics and partisans. And while Ensign Williams seeks to uncover the identity of the mysterious 'Heroine of Saragossa', a conspiracy of revenge within the regiment itself threatens to destroy him before he's even faced a shot from the French.

Adrian Goldsworthy has a doctorate from Oxford University. His books have sold more than a quarter of a million copies and been translated into more than a dozen languages. A full-time author, he regularly contributes to TV documentaries on Roman themes and has lectured on Roman history in both the UK and USA.
GOR005343848
9781780220994
1780220995
Send Me Safely Back Again by Adrian Goldsworthy
Adrian Goldsworthy
Used - Very Good
Paperback
Orion Publishing Co
2013-11-21
368
N/A
Book picture is for illustrative purposes only, actual binding, cover or edition may vary.
This is a used book - there is no escaping the fact it has been read by someone else and it will show signs of wear and previous use. Overall we expect it to be in very good condition, but if you are not entirely satisfied please get in touch with us
Trustpilot