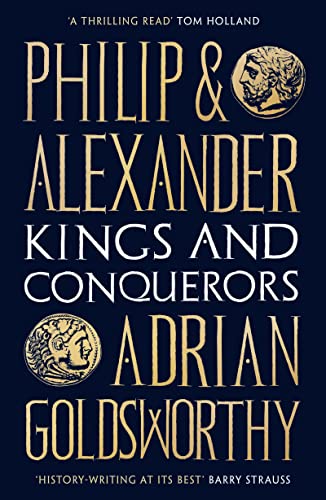 Philip and Alexander by Adrian Goldsworthy

A joint biography that investigates how, during their lifetimes, Philip and Alexander of Macedon transformed a weak kingdom in northern Greece into a globe-spanning empire, and in so doing changed the course of human history.

Philip and Alexander: Kings and Conquerors by Adrian Goldsworthy

By the end of his short life, Alexander the Great had redrawn the map of the ancient world to create an empire that stretched from the Adriatic Sea to the Indian subcontinent. But his success was not just the product of his own genius and restless energy, it was built on decades of effort by his father.

History has portrayed Philip II of Macedon as a one-eyed old man whose assassination allowed Alexander to accede to power. But there was far more to him than this. Through decades of hard fighting and clever diplomacy, Philip unified his country and conquered Greece. His son inherited all of this at the perfect moment for him to win yet greater glory.

'As successful in meeting its ambitions as Philip's kingship, as sweeping as Alexander's conquests' -- Tom Holland
'Belongs on the (sturdy) shelf of any reader interested in military, political, or social history' * Minerva Magazine *
'By pairing the two giants of Macedonia, Goldsworthy helps the reader understand Alexander's life all the better, and sheds light on the achievements and character of Philip' * Aspects of History *
'Sterling scholarship, engaging prose, insightful analysis, and unbiased assessment' -- Victor Davis Hanson
'A gripping history that combined deep scholarship with readability ... This is an epic history. Very much in the vein of the Tom Holland histories of empire, enjoyable and informative but also gripping' * NB Magazine *
Adrian Goldsworthy studied at Oxford, where his doctoral thesis examined the Roman army, and became an acclaimed historian of Ancient Rome. He is the author of numerous books, including Caesar, The Fall of the West, Pax Romana, and Hadrian's Wall.
NGR9781784978778
9781784978778
1784978779
Philip and Alexander: Kings and Conquerors by Adrian Goldsworthy
Adrian Goldsworthy
New
Paperback
Head of Zeus
20210513
672
null null null null null null null null null null
Book picture is for illustrative purposes only, actual binding, cover or edition may vary.
This is a new book - be the first to read this copy. With untouched pages and a perfect binding, your brand new copy is ready to be opened for the first time
Trustpilot