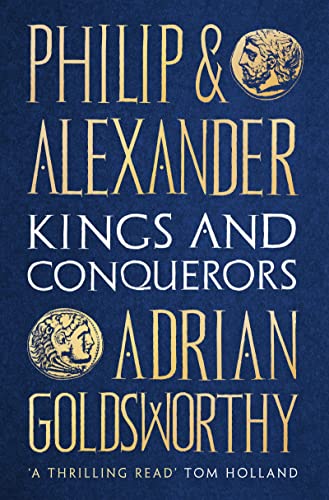 Philip and Alexander by Adrian Goldsworthy

A joint biography that investigates how, during their lifetimes, Philip and Alexander of Macedon transformed a weak kingdom in northern Greece into a globe-spanning empire, and in so doing changed the course of human history.

Philip and Alexander: Kings and Conquerors by Adrian Goldsworthy

Philip and Alexander of Macedon transformed a weak kingdom in northern Greece into a globe-spanning empire. In so doing, they changed the course of history.

By the end of his short life, Alexander the Great had eclipsed the power of Persia, crossed the Hindu Kush and marched into what is now Pakistan, redrawing the map of the ancient world to create an empire that stretched from the Adriatic Sea to the Indian subcontinent. But his success was not just the product of his own genius and restless energy, it was built on decades of effort by his father. History has portrayed Philip II of Macedon as an old man, one-eyed and limping, whose convenient assassination allowed Alexander the Great to come to power. However, there was far more to him than this. Through decades of hard fighting and clever diplomacy, Philip unified his country and conquered Greece. His son inherited all of this at the perfect moment and age for him to chance his luck and win greater glory. Between them, Philip and Alexander played a key role in spreading Greek language and culture over a vast area, the consequences of which were many and profound, for it led to the New Testament being written in Greek, and a Greek-speaking 'Roman' empire surviving in the eastern Mediterranean for a thousand years after the last emperor to rule from Italy.

As authoritative as it is accessible, Philip and Alexander is the latest in a much-praised sequence of essential ancient histories from Adrian Goldsworthy; it is the work of a master historian at the peak of his powers.

Praise for Philip and Alexander:

'A gripping history that combined deep scholarship with readability ... This is an epic history. Very much in the vein of the Tom Holland histories of empire, enjoyable and informative but also gripping' * NB Magazine *
'A fantastic work of ancient history and by pairing the two giants of Macedonia, Goldsworthy helps the reader understand Alexander's life all the better, and sheds light on the achievements and character of Philip. The biography compares and contrasts the two figures, in an original and engaging style, one that I found enjoyable from beginning to end' * Aspects of History *
'With maps, diagrams, colour photographs, and endnotes, a useful bibliography, index, and appendices (including on the Royal Tombs at Vergina), his book belongs on the (sturdy) shelf of any reader interested in military, political, or social history' * Minerva *
PRAISE FOR ADRIAN GOLDSWORTHY:
'Goldsworthy brings a wonderful vitality to his subject; his account possesses an immediacy usually associated with contemporary history. The reader is treated to an enthralling view of a highly complex system of governance' The Times on Pax Romana.
'Adrian Goldsworthy is on top form with Pax Romana. Pointing out that war was virtually endemic in the ancient world, he explains clearly and persuasively how Rome was able to maintain the peace for such a long period' Peter Jones, on Pax Romana.
'Goldsworthy's true expertise is as a military historian and this is what really gives his biography its strength and bite: his depiction of Augustus's relationship with his legions is masterly' Robert Harris, on Caesar.
'Superb, unputdownable and scholarly' Simon Sebag Montefiore, on Augustus.
'Like Goldsworthy's biography of Julius Caesar, this is essential reading for anyone interested in Ancient Rome' * Independent, on Augustus *
Adrian Goldsworthy studied at Oxford, where his doctoral thesis examined the Roman army, and became an acclaimed historian of Ancient Rome. He is the author of numerous books, including Caesar, The Fall of the West, Pax Romana, and Hadrian's Wall.
GOR010829279
9781784978709
1784978701
Philip and Alexander: Kings and Conquerors by Adrian Goldsworthy
Adrian Goldsworthy
Used - Very Good
Hardback
Head of Zeus
2020-09-03
672
N/A
Book picture is for illustrative purposes only, actual binding, cover or edition may vary.
This is a used book - there is no escaping the fact it has been read by someone else and it will show signs of wear and previous use. Overall we expect it to be in very good condition, but if you are not entirely satisfied please get in touch with us
Trustpilot